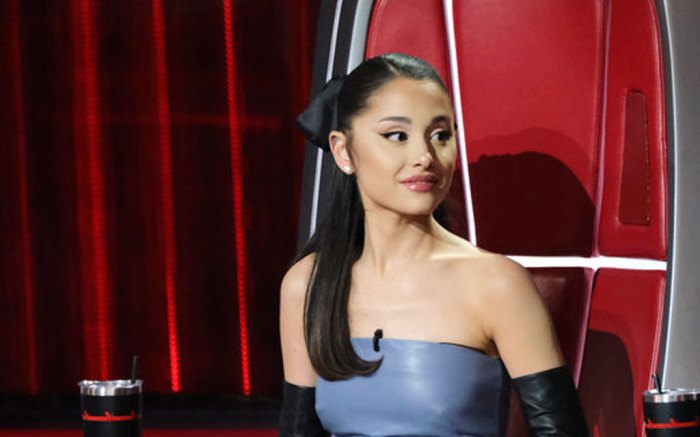 Ariana Grande doubled down on leather on “The Voice” last night.

The singer looked sleek in her black and blue leather combination on the show. The “Thank U, Next” musician sported a strapless light blue dress with visible seams running diagonally across the top. Instead of sporting a full sleeve on her dress, Grande wore a pair of long black leather gloves that covered her whole arm.

When it came to accessories, the 28-year-old kept it simple in a pair of diamond stud earrings, which allowed the look to speak for itself. The hitmaker also wore her go-to hairpiece, a large satin bow which she wore on top of her ponytail. The star styled the same hair look last week on the show. Under the table, the TV personality was wearing a pair of pumps with a thin strip running across her ankle.

In terms of her footwear style, the singer is a pro at platforms and often opts for ultra-high heels. Last week on the show, she wore a pair of towering PVC platform heels with an oversized black blazer that featured crossbody buttons and loose-fitting sleeves and made it into the perfect mini dress. She tends to favor brands such as Club Exx, Demoni, Unravel and more top labels.

When she isn’t in boots or heels, the “7 Rings” musician keeps things casual in Nike Air Force 1 kicks, Crocs clogs and Naked Wolfe chunky sneakers, amongst other styles. Her career in fashion extends beyond just a stylish closet, though. She was named the face of Givenchy’s fall ’19 campaign and previously partnered with Reebok to help debut a brand new silhouette for fall ’18.