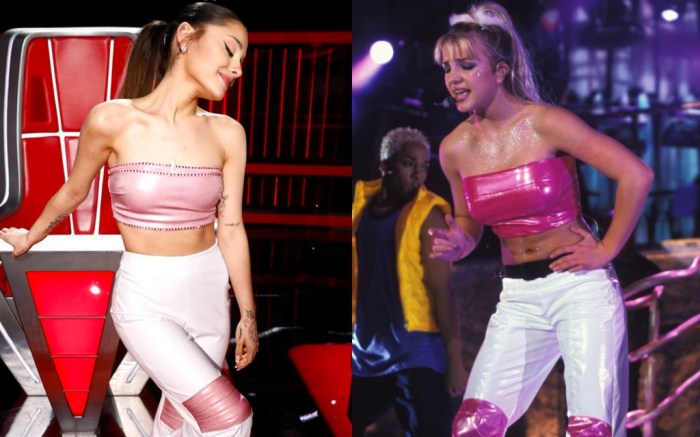 Like many who grew up on her music, Ariana Grande is a Britney Spears fan.

It’s also ’90s Week at the “The Voice,” so, it wasn’t so much of a surprise to see Grande channeling Spears last night in a midriff-baring outfit the former pop princess wore in on stage in 1999. The “7 Rings” singer showed off a baby pink strapless crop top paired with sleek white pants featuring pink swatches covering the knee and towering off-white platform heeled boots.

Spears wore a similar look 22 years ago when she hit the stage to perform at the Pompano Beach Amphitheater on June 28, 1999, in Pompano Beach, Fla. Instead of high-rise trousers like Grande, the Princess of Pop wore low-waisted white pants at the time, along with an ultra-chunky pair of sneakers. She was also covered in glitter all over her chest and abs and wore her sandy blond tresses in a high ponytail with a frilly hair tie.

Grande’s moment paying homage to the Grammy Award-winning musician comes just after she celebrated her 40th birthday last week on Dec. 2. Appearing to be jetting off on a romantic trip, she shared photos snapped aboard a private plane with her fiancée Sam Asghari to Instagram.

Scroll through the gallery to check out Ariana Grande’s style evolution.