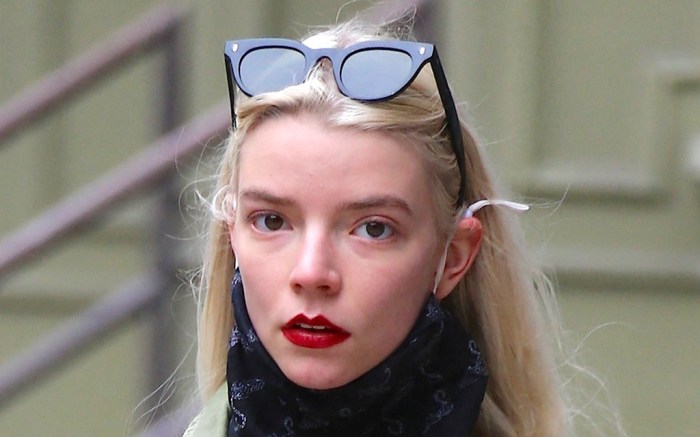 Taylor-Joy’s flared boiler suit can be classified as an effortless wardrobe go-to for spring as it’s a one-piece and doesn’t require a jacket. This denim-linen blend design was designed by Alexa Chung for her namesake label and can be snapped up for $190 via Yoox.

The utilitarian accents on the elevated workwear continued in the emerging A-lister’s footwear choice. Not only are the studded leather shoes ideal for city living, but they also complement heavy-duty winter clothing and — for the open toe-hating urbanites — contrast a lightweight dress in the summer.

The actress topped off the carefree outfit with simple accessories:  a natural-hued canvas carryall, retro cat-eye sunglasses, and a printed scarf doubled-up as a face covering. The “Emma” starlet’s personal style really runs the gamut from tomboy to glam. Her street style and whimsical red carpet dresses are applauded by fashion critics.

Most recently, we’ve seen the 25-year-old star switch out her cozy sweatpants and slip-on UGG slides for a berry Dior tulle gown at the Critics’ Choice Awards and a lace-trimmed Vera Wang minidress at the Screen Actors Guild awards. There, she won Best Actress awards for her role in Netflix’s “The Queen’s Gambit.” Before that, Taylor-Joy donned a dramatic forest-green lurex draped dress by Dior to the Golden Globes in late February with a matching belt and evening coat that took 300 hours to make.

Go edgy like Anya Taylor-Joy in these studded boots.