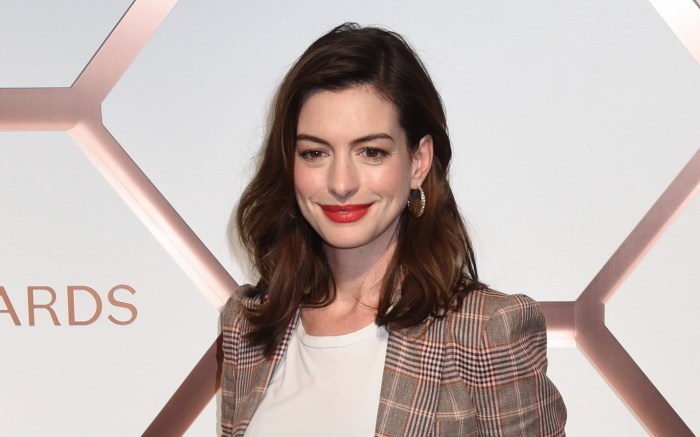 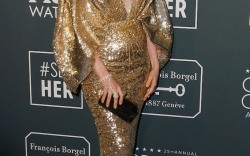 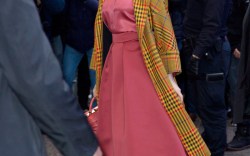 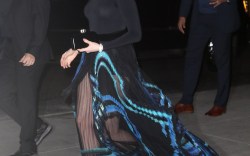 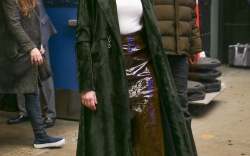 Anne Hathaway looks relaxed in a new still from the filming of the “WeCrashed” TV series alongside her co-star, Jared Leto.

The actress wore a black lace dress covering her knees and a white fur coat that featured a leather trim round the zipper over a simple dress. The jacket also featured leather cuffs that unify the piece. As for the accessories, they were simple and minimal — a gold ring.

Hathaway had on a pair of black patent leather ankle boots that featured padded embossing. The boots have a round toe silhouette and a black zipper which blended in inconspicuously.

The ankle boot is a style that is popular during the summer and fall seasons. They feature a round or square toe silhouette and mostly chunky heel aesthetic. The ankle height of the boots make them an apt choice for summer wear because they don’t allow for the wearer’s foot or leg to overheat.

When it comes to Hathaway’s off-camera style, she’s relaxing in hoodies and chunky sweaters or dressing to the nines in couture Givenchy. She’s a style chameleon when it comes to shoes as well — notably wearing silhouettes from brands like Louis Vuitton, Sophia Webster and Dolce and Gabbana. Her Instagram is her fashion dwelling where she continuously experiments with different garments and silhouettes.

Hathaway is no stranger to the limelight of the fashion industry. One of her most notable roles was in the pop culture classic, “The Devil Wears Prada,” which aimed to show the career and personal life of an overworked personal assistant who worked for an icy editor in chief at a fashion magazine. Hathaway has also had fashion campaigns for Tod’s.

Slide on a pair of ankle boots to put an extra kick in your summertime outfits, inspired by Anne Hathaway.