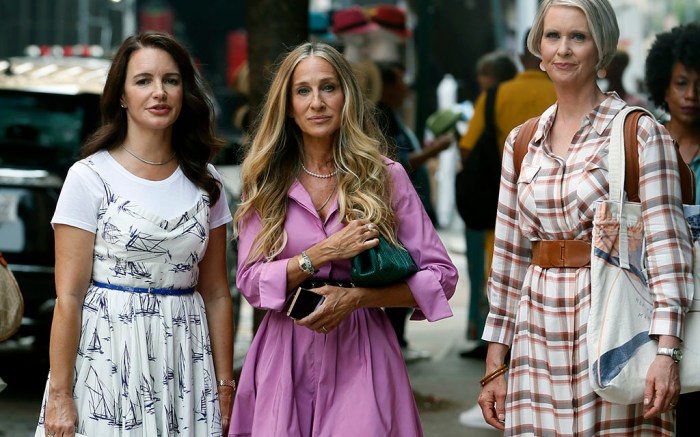 And just like that, it’s here. After months of “Sex and the City” fans seeing behind-the-scenes photos from set of Sarah Jessica Parker and the gang gallivanting around New York in a new set of fashions, the HBO Max reboot finally got its premiere date.

Today, the teaser trailer for “And Just Like That” premiered, with its first two episodes set to debut on Dec. 9. The following eight episodes of the 10-episode season will then release one at a time on subsequent Thursdays.

In the trailer, we see Carrie kissing Big, Charlotte with husband Harry and Miranda embracing Steve and her grown-up son.

Plus, we see a peek at new characters in actors Sara Ramírez, Sarita Choudhury, Nicole Ari Parker and Karen Pittman.

While in recent weeks Carrie’s updated style has been widely criticized, the trailer, however, shows that her love of fashion is bigger and better. And there’s an Easter egg, too, which pays homage to the “Sex and the City” film. Remember that studded leather belt? Well, it’s back again. In the teaser, you’ll see Carrie in a fuchsia Carolina Herrera dress paired with that belt and black leather stiletto pumps.

To see more glimpses of “And Just Like That” fashion moments, watch the trailer below.

And see more outfits from the “Sex and the City” reboot “And Just Like That.”