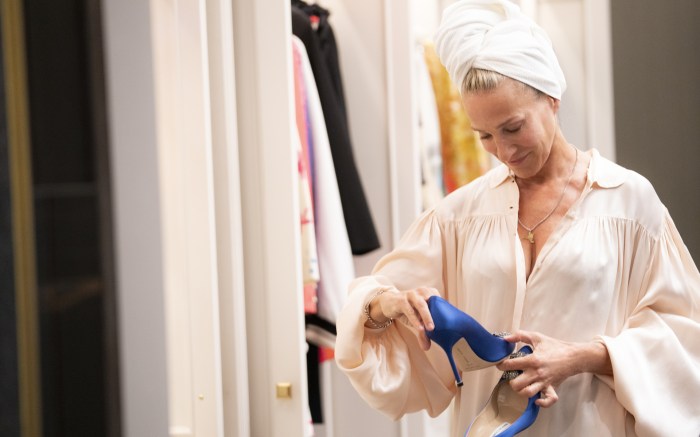 Warning: This story contains spoilers on the first episode of HBO Max’s “And Just Like That,” which debuted December 8.

When Mr. Big proposed to Carrie Bradshaw in “Sex and the City” with a pair of sapphire blue satin Manolo Blahnik pumps, it was instantly iconic, a moment forever etched in movie history — and a literal Cinderella story line for fans hopeful for a fairy tale ending to the blockbuster HBO show, which wrapped as a TV series in 2004 and continued on in the 2008 film. It also spurred the sales of hundreds of the crystal-embellished Hangisi style to brides and single ladies alike, quickly becoming the footwear brand’s most recognizable heel.

So perhaps it was only fitting — or maybe inevitable — that the shoes also ended up having a key moment in the tragic ending of Carrie’s happily-ever-after with Mr. Big.

“And Just Like That” begins with the same happy-go-lucky vibe that became a signature in the latter half of the original series as well as its subsequent two films. The ladies of “Sex and the City” have all changed — especially after a pandemic, which the characters openly acknowledge — but somehow it’s all still the same, a rose-tinted view of life in the Big Apple, save for a mysterious falling-out between Carrie and Samantha.

The characters are still fabulously (and yes, unrealistically) dressed and seemingly thriving each in their own individual ways. Carrie has opened a new chapter in her career as a sex columnist, appearing on a sex-positive podcast where her cisgender voice only a supporting role. Charlotte is leaning into her role as a full-on Upper East Side mom, buying Oscar de la Renta dresses to match her own for daughter Lily’s upcoming piano recital, while Miranda is heading back to school for a masters in human rights, abandoning corporate law for a more altruistic legal career.

But as the debut episode continues, it’s clear that some of the sun-dappled optimism is also hinting at a tragic foreshadowing. After returning home from a podcast session, Carrie and Mr. Big have one of their idyllic, child-free nights in, cooking dinner while reminiscing on how the main character used to store her sweaters in the oven. They change their plans to drive out to the Hamptons so that Carrie can attend Charlotte’s daughter Lily’s piano recital. Mr. Big tells her he will skip the recital so that he can do his 1,000th Peloton ride.

While she’s getting ready for the evening, Carrie opens the doors to her fantasy closet and gives her shoe-lover tag line of “Hello, lover” to her wall of high heels, singling out her Manolo Blahnik Hangisis in a second. Before she leaves the apartment, she stops to say goodbye to Big (as he is fatefully smoking a cigar). “Do you notice anything special?” Carrie asks him. “I see the wedding shoes. How could I not? Those blue shoes are the whole ballgame” he replies. Before she rushes out the door, the couple have a moment of reflection as Mr. Big tells her, “I’m just looking at you,” for what viewers come to realize is the last time.

As the gang reunites for Lily’s recital, viewers simultaneously watch Mr. Big as he settles into his ominous Peloton ride. Lily’s masterful rendition of Mozart is spliced with Big’s interval pushes, and Carrie watches the former while blissfully unaware of what’s happening at home. When she arrives home early after the recital, she finds Big slumped over in the shower, the water running over him as he clutches his arm.

She rushes to his side as he is taking his last breaths, and as she clutches him and tries to move him, her heels fall off. The camera cuts to a shot of the shoes, askew on the tile floor, the shiny blue satin soaked through by the shower stream, her token of love literally washing away as her husband dies in her arms.

It’s a lot to take for any “Sex and the City” fan who may have been hoping to see more of Carrie’s fairy tale life with Mr. Big.