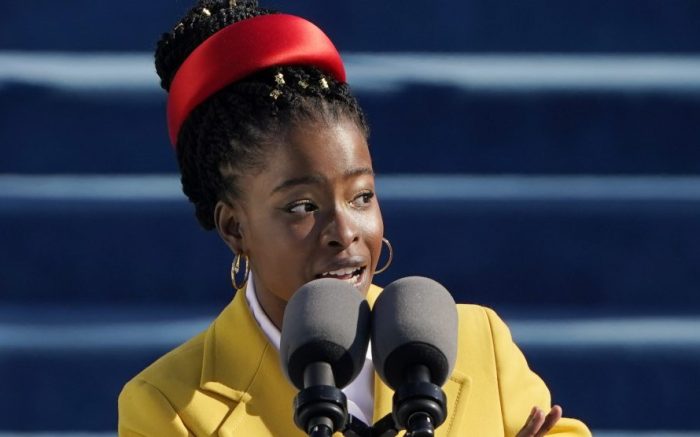 Activist Amanda Gorman brought the sunshine with her words and outfit choice as she delivered a powerful poem at the 2021 presidential inauguration.

The 22-year-old poet laureate — who is the youngest person to deliver a poem at a presidential inauguration — captivated America in a vibrant yellow coat from Prada. Called the Double-Breasted Natté Toile Coat, the outerwear piece offers a sophisticated silhouette with a flared fit, classic lapels and a front button closure. The coat retails for $3,950 at Prada.com.

Underneath the coat, Gorman sported a white poplin shirt, a black leather pencil skirt and a red satin headband. All three pieces are also from Prada. As for footwear, Gorman kept it sleek in a pair of black leather boots. The shoes feature a pointed toe with a thick block heel.

Gorman also touched on how her very presence on the inaugural stage was historical, saying: “We the successors of a country and a time where a skinny Black girl descended from slaves and raised by a single mother can dream of becoming president, only to find herself reciting for one.”

President Joe Biden and Vice President Kamala Harris‘ inauguration made history today for a myriad of reasons. Biden is the oldest person ever sworn in as president while Harris is the first-ever female vice president of the United States. The daughter of Jamaican and Indian immigrants, she is also the first Black person and first person of South Asian descent to serve in the second-highest office. She joins President Joe Biden in leading a country left on the edge of its seat following the second impeachment of current President Donald Trump by the House of Representatives last week.

Later in the evening, a primetime special, titled “Celebrating America,” will spotlight American heroes and is scheduled to take place at 8:30 p.m. ET. The 90-minute program will be hosted by Tom Hanks and will feature speeches from Biden and Harris. Bruce Springsteen, the Foo Fighters, John Legend, Eva Longoria and Kerry Washington will also make appearances.