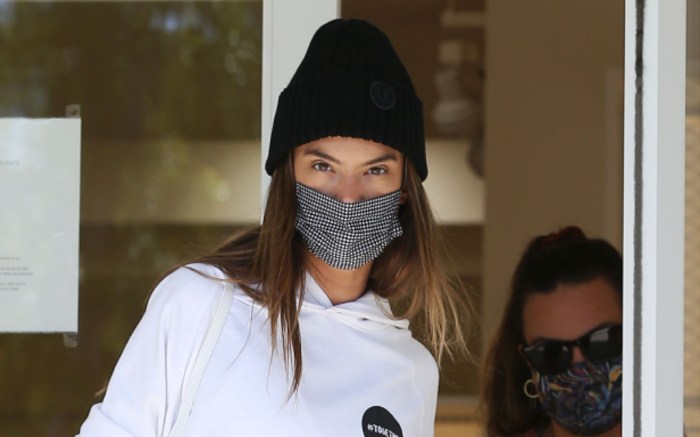 On Wednesday, the model stepped out to do some shopping in Los Angeles, wearing a cozy look that included a white hooded sweatshirt and a black beanie. Ambrosio teamed the comfy pieces with a pair of red track pants. The look featured a high-waist, a side button-up hem and a wide-leg.

The sporty style had a major moment a few years back with celebrities including: Kim Kardashian, Kourtney Kardashian, Bella Hadid, and Rihanna styling the look with everything from sneakers to heels. The style was/is perhaps so popular due to its versatility and coziness.

As for Ambrosio, the star styled the vibrant pants with a pair of sneakers from New Balance. Called the 327 Casablanca Black Logo, the sneaker features a mix of 1970s aesthetics and modern logo graphics. The upper is made of suede and nylon and the outsole is constructed with rubber for traction. The shoes were first released in September of last year and are currently available on the resale market with StockX.com selling the shoe for $130 and up.

When it comes to her wardrobe, Ambrosio loves to play around with trends. She also doesn’t shy away from mixing bold prints and patterns. Earlier this month, the model stepped out in Los Angeles, wearing a paisley and floral-adorned jumpsuit. The look, which gives off a carpet-like aesthetic, featured a beige, red, green and orange colorway. While the look is chic, it can also be considered busy, making it somewhat challenging to style.

Ambrosio, however, provided the perfect tip by balancing out the jumpsuit with black accessories. Around her shoulder, Ambrosio sported a bag from Chanel. The style, which currently retails for $6,300 at TheRealReal.com, features an interlocking CC logo with a quilted pattern and chain-link accent. The bag is finalized with top and chain-link handle.

Next, Ambrosio added a black pageboy cap. As for footwear, she opted for a pair of sleek combat boots. The shoes featured a lace-up closure, rounded toe and a flap detail at the ankle. The black accessories and boots added a calm and classic touch to the look, allowing the jumpsuit to be the statement.

Aside from boots and sneakers sandals, Ambrosio has been known to rock other buzzy looks, including transparent heels. Her go-to labels include Gianvito Rossi, Giuseppe Zanotti, Common Projects, Golden Goose and Adidas. The Victoria’s Secret model, who has posed in campaigns for Schutz and Swarovski, also has her own swimwear line, Gal Floripa.

Click through the gallery to more of Alessandra Ambrosio’s street style.