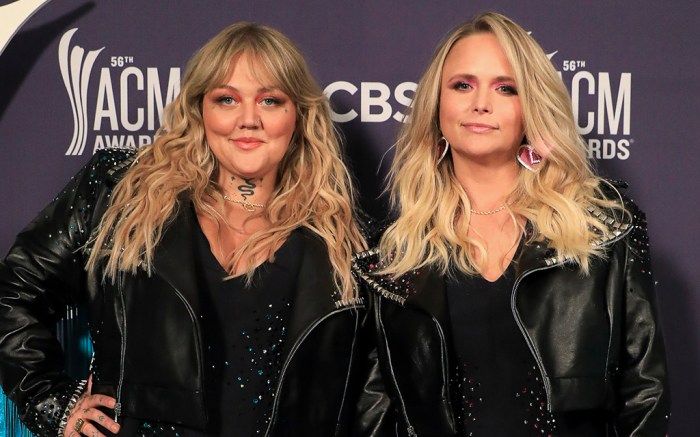 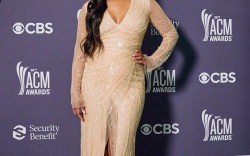 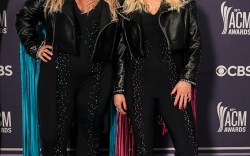 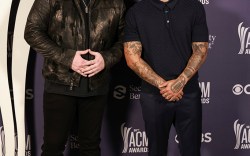 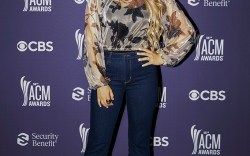 The 56th Academy of Country Music Awards have commenced in Nashville, and the industry’s biggest stars have arrived in style. This evening’s ceremony is hosted by Keith Urban — who is returning for a second consecutive year — and Mickey Guyton. Guyton is making history tonight as the first Black woman to be MC of the big show.

In honor of the milestone, Guyton hit the red carpet in a celebratory beige gown that was embellished with jewels and featured sheer sleeves. Guyton continued the glamorous theme by styling her hair in loose curls and a side part. As for footwear, the songstress opted for Stuart Weitzman beige satin Anny Pumps. The sleek shoes feature a pointed toe construction and sit atop a stiletto heel. In addition to hosting, Guyton was also nominated for new female artist of the year.

Also in attendance was Miranda Lambert. The “Bluebird” songstress posed alongside Elle King in coordinating outfits. Both Lambert and King opted for sparkly black jumpsuits teamed with leather fringe jackets. Lambert’s jacket featured pink fringe while King’s look was a vibrant blue. The duo styled their looks with black shoes. Lambert’s appeared to be a pointed toe bootie that sat atop a block heel.

Gabby Barrett also made an appearance, sporting a pair of trendy flare jeans with a floral sheer top. On her feet, Barrett opted for pointy caramel-colored pumps.

The warm hue appeared to be a big one for the night as Tenille Arts opted for an off-the-shoulder gown in the shade. The sheer dress featured a high slit and a chain strap and belt. Arts finalized the look with a sparkly clutch and gold square toe heels. The footwear featured a strap across the toe and ankle and sat atop a stiletto heel.

Jimmie Allen brought some pizazz to the event, wearing a vibrant purple suit that he teamed with a wide-brim hat. As for footwear, Allen added a casual touch by sporting a pair of white sneakers that came equipped with purple and neon green accents.

Devin Dawson also opted for a suit, sporting a checkered blazer and matching trousers. The blazer offered a bit of a surprise as it featured an ombre-effect at the shoulders as it faded from black to plaid.

The ACMs return to Nashville marks the ceremony’s first since the pandemic. Aside from Guyton, Maren Morris and Chris Stapleton are also up for awards. Morris and Stapleton lead in nominations with both scoring six each. Lambert follows behind the two with five nominations while Thomas Rhett and Ashley McBryde have four each.

Click through the gallery to see more moments from the 2021 ACM Awards.