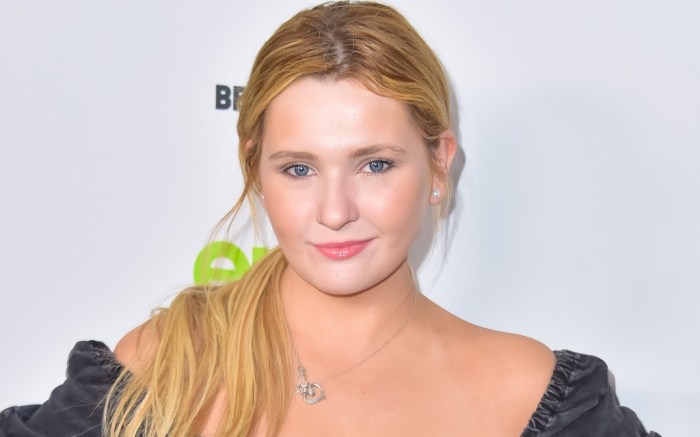 The “Scream Queens” star hit the red carpet at Gearbox in a sleek take on the puff-sleeved dress trend. The actress wore a black denim minidress, complete with bunched short sleeves and a sweetheart neckline. The material, seen most commonly in casual jeans and jackets, gave the piece a distinct rock ‘n’ roll look. Breslin kept her accessories minimal with a delicate necklace and bracelet.

On the footwear front, the “Stillwater” star continued her punky look with a pair of vegan boots by Altercore. The square-toed Mazikeen style featured shiny black uppers, as well as thick platform soles and heels totaling at least 3 inches in height. When paired with her dress, Breslin’s shoes added a sharp edge with retro flair. Her boots retail for $155 on DollsKill.com.

Platform boots are quickly becoming a top trend for the fall season, now that temperatures have dropped. The style has remained popular during colder months due to its supportive height boost, as well as coverage from chillier weather. Breslin is the latest star to step out in a pair. Recently, celebrities including Kourtney Kardashian, Rita Ora and Olivia Culpo have also donned boots from Naked Wolfe, Vera Wang and Valentino.

When it comes to shoes, Breslin’s preferences are often edgy and bold. The “Dirty Dancing” actress often wears in combat and block-heeled boots by Jeffrey Campbell and Dr. Martens. Breslin is also known for donning pumps and sandals accented with crystals or metallic tones on the red carpet, from top brands Sophia Webster, Christian Louboutin and Stuart Weitzman. However, she also favors affordable pumps from labels Aldo and Chinese Laundry.

Give your fall looks a punk edge with black platform boots.

Click through the gallery to see Breslin and more stars’ best style moments from the 2021 Cannes Film Festival.