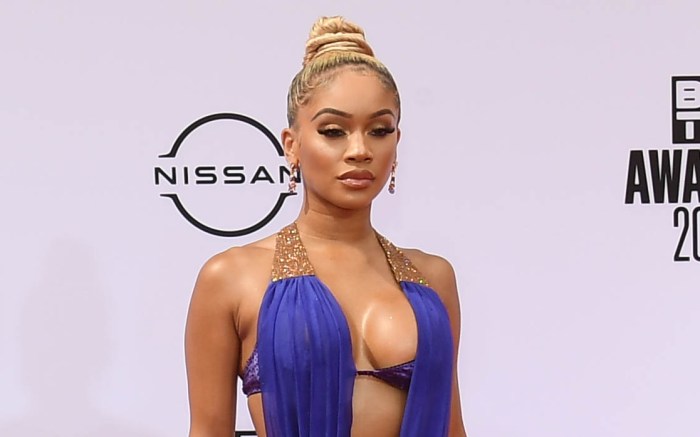 Saweetie was a vision in purple on the red carpet at the 2021 BET awards.

The singer wore a sweeping Dolce & Gabbana gown that showed off plenty of skin, complete with a bra-style top, thigh-high slits and a decadent train. The dress was done in a rich amethyst color with glittering gold fabric at the hips and straps.

The singer opted for dainty gold jewelry, a diamond-encrusted anklet and a bedazzled manicure and pedicure for extra bling.

Saweetie has often been spotted in Dolce & Gabbana, and modeled for its “DG Next Chapter” social media campaign in March alongside Kim and Kourtney Kardashian, amongst other stars. Posting a photo to Instagram for the campaign, the rapper wore a bandage-style dress from the Italian label featuring mesh overlays and opaque paneling.

Following last year’s virtual show, the 2021 BET Awards airs live on Sunday, June 27 at 8 pm ET/PT from the Microsoft Theater in Los Angeles. The theme of the evening is “The Year of the Black Woman” to honor black female’s impact on culture and will be hosted by Golden Globe winning actress, filmmaker and philanthropist Taraji P. Henson.