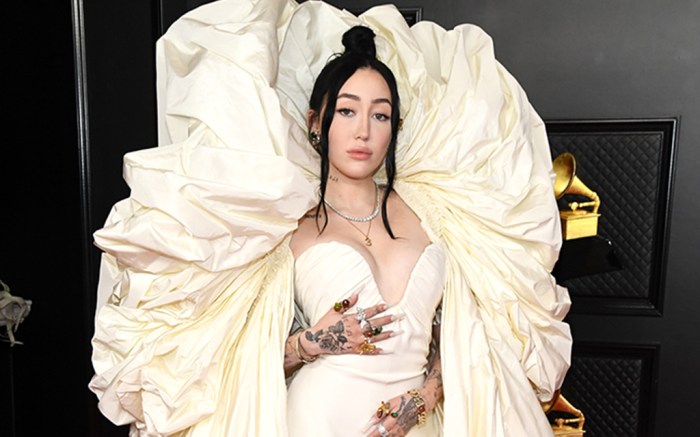 Noah Cyrus just had a major fashion moment at the 2021 Grammy Awards.

Nominated for Best New Artist, the singer opted for a dramatic gown from Schiaparelli for the biggest night in music. She balanced out her bold look with sky-high golden platforms that featured a square-toe, bearing resemblance to a signature style from Giuseppe Zanotti.

Brett Nelson, Cyrus’ stylist, no doubt wanted the singer to feel strong, elegant and powerful for the evening — the Schiaparelli Couture dress even was the closing look from the fashion house’s spring ’21 haute couture collection. The strapless white silk crepe dress features a dramatic plunging neckline and a voluminous cumulus silk taffeta stole.

For footwear, the Grammy-nominated musical artist appears to be wearing the Bebe platform from Giuseppe Zanotti. The signature square-toe style has a 2.7-inch platform and stands on a 6-inch heel. You can find a similar style on Giuseppezanotti.com for 50% off of its original price.

Cyrus is just one of the handful of arrivals on the red carpet who opted for a daring look. The Grammy Awards are often an arena for some of the boldest looks when it comes to red carpet style. But the “Make Me Singer” is no stranger to daring looks.

At the 2020 Country Music Award Show, Cyrus’ performance outfit included nothing but a cowboy hat and thigh-climbing boots. It’s no secret that the star loves to make a statement with her outfits.

Tonight in Schiaparelli Cyrus did just that. Founded by Italian-born designer, Elsa Schiaparelli, the French fashion house was among the most prominent in the 1930s thanks to Elsa’s imaginative designs and collaborations with artists such as Salvador Dali. The label continues its legacy of surrealism and elegance under the creative direction of Daniel Roseberry, whose designs have appeared most recently on stars such as Lady Gaga, who wore a broach during her Inauguration Day performance, as well as Emma Corin, who opted for a bejeweled dress for the Critics’ Choice Awards.

Now, Cyrus is among those who continue to champion for Schiaparelli, a voice in fashion that always pushes to be playful and bold.

Want more? Click through our gallery of All the Celebrity Red Carpet Arrivals at the 2021 Grammy Awards.