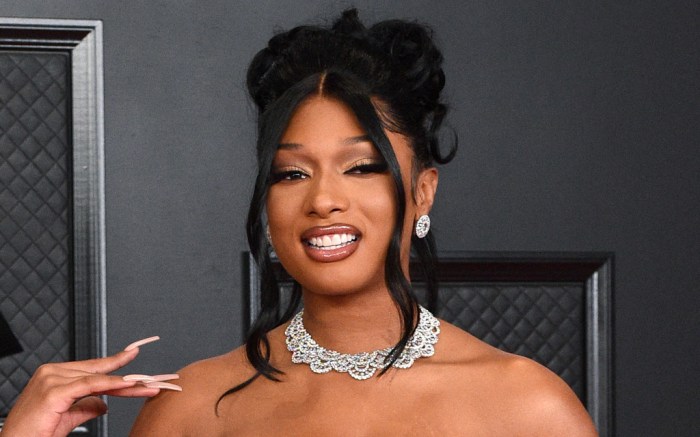 Megan Thee Stallion is glowing on the 2021 Grammy Awards red carpet — potentially because the rapper is already a winner tonight.

Receiving the award for Best Rap Performance earlier tonight, the “Savage” musician stunned on the red carpet in a strapless orange Dolce & Gabbana gown complete with a high-leg slit and a voluminous bow finish.

The look came adorned with glittering pieces from Chopard — the musician even told Giuliana Rancic that she just wanted “to pop and look like a Grammy” during the “E! Live from the Red Carpet” show. Performing tonight, Megan Thee Stallion topped off her outfit with coordinating orange sandals; the block heels featured a double strap design with endless gems across the uppers.

While her music career is launching off the charts, Megan Thee Stallion also racked up a series of high-profile deals in the fashion industry. She previously starred in Puma’s campaign to promote its Cali Sport sneaker back in November 2019 as well as inked a deal with Fashion Nova for spring ’20; the 5-foot-10 star’s capsule offers jeans for taller frames. Additionally, the rapper made an appearance in Rihanna’s Savage x Fenty lingerie brand’s summer ’20 campaign and Coach’s spring ’21 presentation.

She also serves as a judge on HBO Max’s “Legendary” which premiered on the platform in May; the series is a voguing competition inspired by the underground ballroom community. With members from different “houses” competing for a $100,000 prize, Megan The Stallion serves as a judge for the battles along with actress Jameela Jamil, celebrity stylist Law Roach and dancer Leiomy Maldonado, also known as the “Wonder Woman of Vogue.”

Click through the gallery to see more red carpet arrivals at the 2021 Grammy Awards.