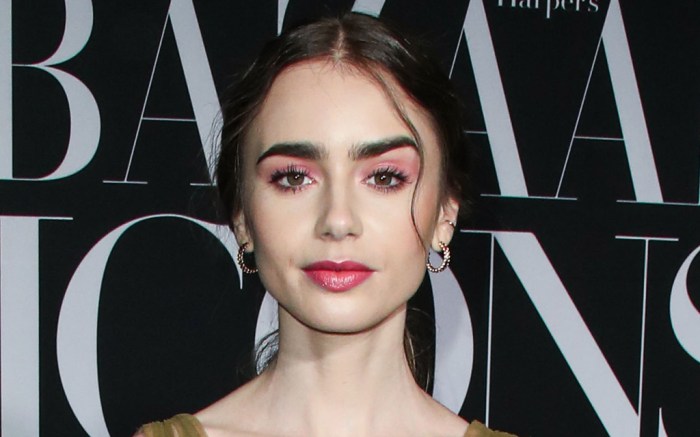 Lily Collins showed off a sweeter side to her standout style for the 2021 SAG Awards tonight.

The “Emily in Paris” actress is making an appearance during tonight’s show, revealing the look earlier on social media. For the occasion, Collins went glam in a collared minidress from Georges Hobeika’s spring ’18 collection; the short-sleeve design features a flouncy skirt and buckled overlay, all coated in glittering embellishments and crystal gems.

As for footwear, the Netflix star continued the feminine touches of her outfit with her choice of towering sandals. The stiletto heels highlighted baby pink uppers with a thin strap across the ankle and a thickened band securing the toes.

The Screen Actors Guild Awards honor the best in television and film for the year. This year’s SAG Awards air tonight and are shaping up to be one of the most unique productions yet, highlighting the show’s signature “I Am An Actor” stories in a new and socially distanced way. You can expect appearances from Viola Davis, Dan Levy and more hit stars in the hour-long special.

When she isn’t in dressier designer duds, Lily Collins’ off-duty footwear style includes a mix of labels such as sustainable brand Rothy’s and workout-ready pairs from Brooks Running. The “Mank” star also serves as an ambassador for Lancôme and has previously starred in ad campaigns for Barrie on top of appearing front row for the biggest names in fashion during Fashion Month — think Chanel, Givenchy,  and Valentino amongst other major designers.

Click through the gallery to find more of Lily Collins’ top style moments over the years.