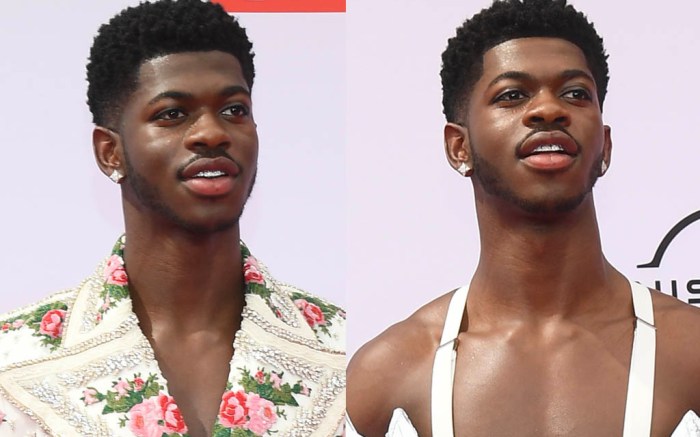 Lil Nas X pulled double duty at the 2021 BET Awards, wearing not one but two statement-making outfits on the red carpet.

The 22-year-old singer looked utterly royal in his first ensemble, a dramatic white gown by Andrea Rossi. The outfit featured a corset-like top and full skirt, which was also the young designer’s finale look from his debut Pitti Uomo collection in 2020. It featured blue hand-drawn landscape prints reminiscent of aristocratic vintage style, which has been especially popular this year due to hit shows like “Bridgerton” on Netflix.

For his second look, The “Montero (Call Me By Your Name)” singer wore a dazzling cream suit by Richard Quinn, featuring antique rose and crystal embroidery. The suit’s exaggerated lapels and flared legs were strongly ’70s-inspired, fitting into Lil Nas X’s groovy and colorful style. The garment was also fresh off the runway, premiering several days ago in Quinn’s fall ’21 collection film. Similarly to the gown, this ensemble was accessorized with diamond stud earrings and minimalist rings.

See more celebrities on the red carpet at the 2021 BET Awards.