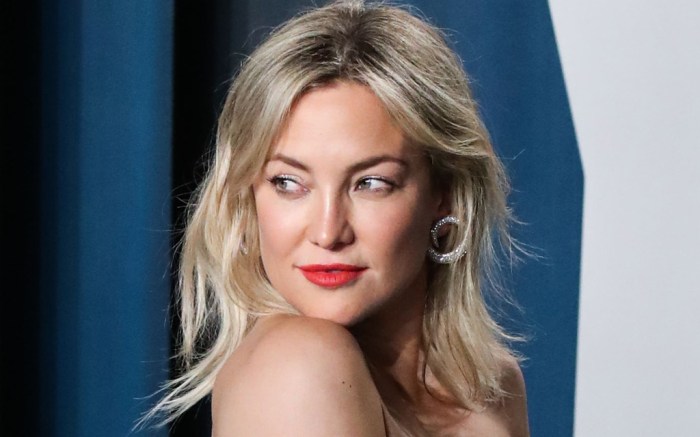 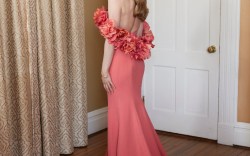 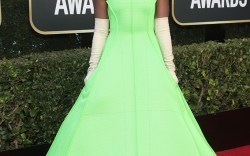 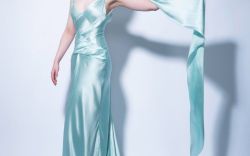 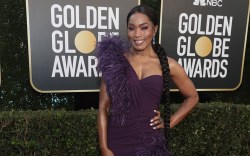 Taking on the virtual television and film awards from the comfort of her own home, the “Music” actress still opted for a bold style moment with a little help from Louis Vuitton. The custom designer gown included an off-the-shoulder silhouette, layered a glittering corset-style bodice over a silky black satin base; the unique piece came finished with a ruffled midline and a cinched black belt for a bold touch.

Hudson, as styled by Sophie Lopez, continued the glam appeal of her look with the addition of eye-catching Bulgari jewels.

The Golden Globes aired live last night on NBC with Tina Fey hosting from The Rainbow Room in New York City while Amy Poehler co-hosted from the Beverly Hilton in Los Angeles. Hudson herself was up for Best Actress in Musical or Comedy for her role in Sia’s film, “Music.”

Making the at-home moment a family affair, Hudson was joined by her partner Danny Fujikawa as well as her recognizable brother and mother, Oliver Hudson and Goldie Hawn.

As for Kate Hudson herself, When she isn’t in glam designs, you can oftentimes find the “Fool’s Gold” actress in pieces from her own line of athletic apparel, Fabletics. Beyond co-creating Fabletics, Hudson’s experience in the fashion industry is neverending. She partnered with New York & Company in 2018 as an ambassador and has previously starred in campaigns for Jimmy Choo, Ann Taylor, La Mer and Michael Kors amongst others.

For her more formal occasions, the “How To Lose a Guy in 10 Days” star can be found in everything from Zuhair Murad Couture and Tamara Mellon heels to Atelier Versace, Prada and Reem Acra. Her off-duty outfits include, of course, Fabletics pieces but also Puma sneakers, Ugg slippers and even Danner hiking boots.

Click through the gallery to find more of the best-dressed stars at the 2021 Golden Globe awards.