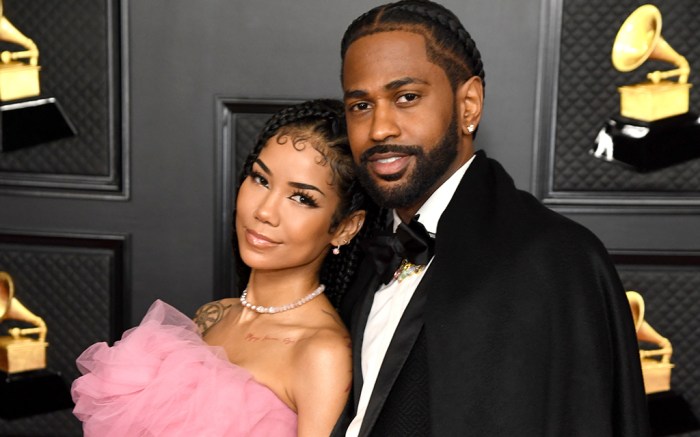 Jhené Aiko made quite the statement on the red carpet at the 63rd annual Grammy Awards.

Appearing beside Big Sean, who wore a classic black tuxedo, the “None of Your Concern” singer stole the show with a pink floret high low ruffle gown from Monsoori. The elegant dress gave the classic red carpet gown a contemporary twist thanks to the slit at the waist that showed off Aiko’s toned stomach.

Aiko, who is up for six awards tonight, including for Best Album, Best R&B Performance and Best R&B Song was among the 2021 Grammy arrivals who opted for a bold look. The three-time Grammy nominee also hosted the Grammy Award Pre-Show, which kicked off at 3 p.m. ET.

Like several award ceremonies this season, the Grammys looked quite different this year. With some parts live and others remote, the red carpet didn’t disappoint with stars still participating in the tradition of wearing the boldest styles to the Grammy Awards. Throughout the course of its run, the music awards show has been a space for stars to wear glam but daring outfit combinations.

Aiko was among the handful of stars to wear beautiful couture gowns. Noah Cyrus appeared in a hooded gown from Schiaparelli and Doja Cat wore a daring plunging neckline dress that featured green feathers throughout.

In addition to daring outfits, pink was among the most popular color of the evening. Taylor Swift opted for a pair of pink suede peep-toe heels from Christian Louboutin that popped against her floral Oscar de la Renta dressed and musical artist Debi Nova wore a shocking pink strapless high low dress complete with studded nude sandals.

As for Aiko, she continues to be at the forefront of music and her red carpet look of the evening has surely earned her some fashion points. We can’t wait to see what she wears next.

Want more? Click through our gallery of All the Celebrity Red Carpet Arrivals at the 2021 Grammy Awards.