Harry Styles Is a Rockstar in a Leather Suit, Heeled Loafers & Feather Boa at the 2021 Grammys 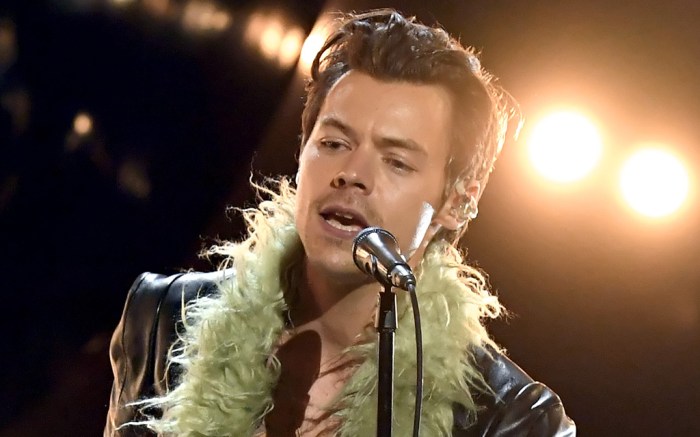 Harry Styles channeled the boldest rockstar styles of decades past for his 2021 Grammy Awards performance.

A sleek piece of leather attire has become one of the biggest trends this winter — and now this spring, too. Whether in the form of a jacket, skirt or, in Harry’s case, a full suit, the effortlessly cool material offers an easy way to add a glam yet edgy touch to all looks, as exemplified by the likes of Travis Scott, Kendall Jenner, Zoe Kravitz and more.

The finishing touch for the outfit came in the form of his heeled loafers. The sleek black leather pair almost camouflaged into his choice of suit, set atop a lifted block heel that appeared to measure over 2 inches in height; Styles has previously picked similar silhouettes and heeled boots from his go-to brand, Gucci.

When it comes to style, the 27-year-old star oftentimes eschews gender conformity and chooses outfits and footwear that could be considered breaking expectations and standards. The “Falling” singer elevates his ensembles with bold patterns and bright colors and tends to favor his most beloved $1,250 Gucci heeled boots; he sports the silhouette in white, black, red and more shades to team his ensembles both on and off the stage. He also taps FN’s Athletic Brand of the Year New Balance as well as Keds and Nike for his casual off-duty shoes both on and off the set of his upcoming film, “Don’t Worry, Darling.”

Click through the gallery to find more stars at the 2021 Grammy Awards.