Worst-Dressed at the 2021 Grammy Awards, According to You 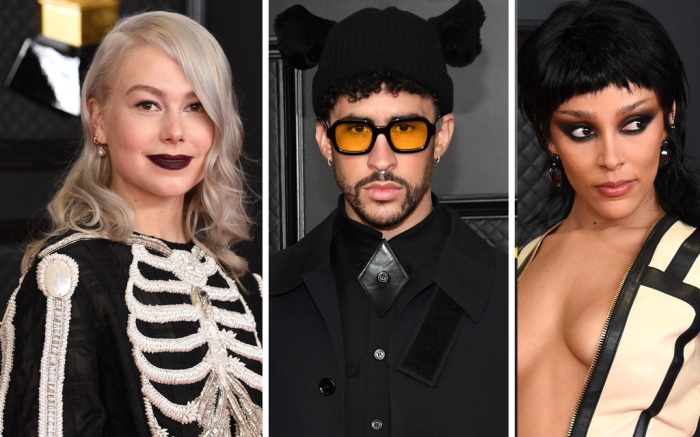 The 2021 Grammy Awards were filled with a slew of trending red carpet looks, bold suits and, of course, sleek footwear moments.

While many looks won awards both on and off the red carpet, there were a few ensembles that had fans questioning their favorite artists. Ahead, find the worst dressed stars at the 2021 Grammy Awards, according to you on Twitter.

Doja Cat modeled a custom Robert Cavalli gown with a feathered trim and a low-cut unzipped bodice. While some praised her bold choice of attire other fans were questioning the look across social media and also were amazed by the daring neckline.

I love Doja Cat soo much but this is ugly af. The dress is not cute and the hair is a mess. pic.twitter.com/zP3J6gLqJP

Noah Cyrus brought her standout taste to tonight’s show as she was up for Best New Artist. The couture look came courtesy of Schiaparelli and was not one to be missed with its added voluminous shoulder piece — and users across social media did not let the disputed design go unquestioned.

Noah Cyrus is giving me major pregnancy pillow vibes in that dress. #GRAMMYs

Noah Cyrus's dress was cute but why did she attach a bed sheet to it?😭 pic.twitter.com/twpy5qfF4t

Also, I love Noah Cyrus more than most people … but her dress was absolutely horrid. #Grammys

Bad Bunny brought 2021’s biggest combat boot trend to the red carpet for the Grammys, matching a chunky lace-up pair to a fresh-off-the-runway Burberry coat and pleated dress. When it came to accessories, though, a selection of fans believe that his statement hat missed the mark.

Bad Bunny can never dress nice for once.

I want to know what Bad Bunny was thinking when the hat was decided. It reminds me of Shrek's ears and I can't unsee it lmaoooo clearly having a good time tho and it works pic.twitter.com/L10ob3AXcL

With a little help from Thom Browne, Phoebe Bridgers turned herself inside out in a black gown complete with a skeleton-coated design. The gothic-inspired piece made a case for bold attire and everyone knows that a daring move leaves room for admirers and critics.

While many remains arrived at museums with less than honorable circumstances, this skeleton was donated by a woman who wanted her body on display at the Mutter Musuem. Perhaps Phoebe Bridgers and her skeleton dress will also be donated to science? #GRAMMYs #AwardShowsSoMuseum pic.twitter.com/0keqvyZuva

here me out phoebe bridgers should’ve been in ahs coven

Showing off their sisterly coordination, Haim arrived in matching periwinkle Prada designs each with their own personal twist. From 2000s-chic pants to cutout-sleeved dresses, all three members of the band slipped on the same set of kitten heel slingback pumps. The unique silhouettes, though, had many thinking three strikes and you’re out.

What the hell is happening here? I have so many questions. HAIM in Prada #grammys pic.twitter.com/BB68J9BQJW

Telling my son these are three evolutions of the same Pokémon 😹

((they are sisters, how do folk not know that??)) pic.twitter.com/vaXQqSwRoy

Please, pleasse one more, for the worse dress, just one more ok maybe two they will fight it out… No, no, No really no! It's not October. Singer Phoebe Bridgers, Singing sisters Haim. Do they work at the hospital part-time? Asking! Ok, am stop more later. pic.twitter.com/CtuPwu2tU2

Leave it to Harry Styles to bring feather boas back from early 2000s pop styles. The “Watermelon Sugar” singer of course had to tap his favorite brand Gucci for his evening attire, modeling a mix of prints and accessories that left a few Twitter users disappointed.

glad he looks happy but it's gon be on the worst dressed list https://t.co/RzzTHfxAgk

Harry styles’ stylist did him so dirty that outfit was ugly

Click through the gallery to find more red carpet arrivals at the 2021 Grammy Awards.