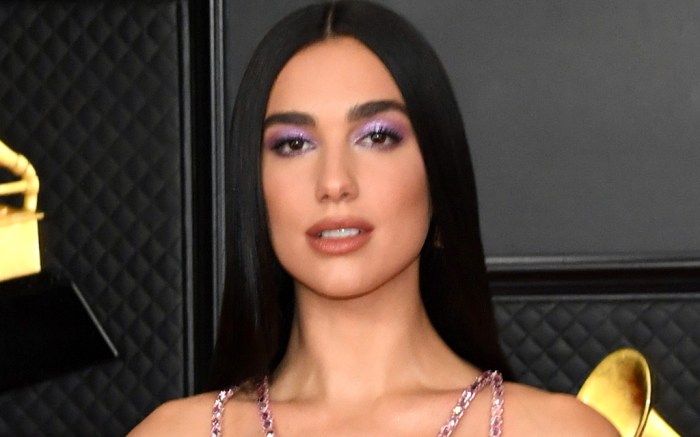 Dua Lipa glittered on the red carpet at the 2021 Grammy Awards, soaking up the glory of her six nominations tonight.

The “Levitating” singer arrived with flair thanks to her Versace gown; the custom design featured a high-leg slide and full chain design with a semi-sheer and iridescent appeal.

Peeping out from under the hem of her designer gown then came a set of square-toe sandals with embellished triple straps. The glittering heels featured a metallic lift, bearing resemblance to similar silhouettes from Versace that retail for over $1,000.

Beyond a Grammy Award-winning music career, Dua Lipa herself dips her toes in the fashion world quite often. From sitting from rows at major shows during Fashion Month to selecting daring duds for red carpet appearances, she keeps things regularly exciting. The “Don’t Start Now” singer previously appeared in campaigns for YSL Beauté and Fragrance, Adidas and Pepe Jeans amongst others.

Click through the gallery to find more stars like Dua Lipa and Lizzo arriving at the 2021 Grammy Awards.