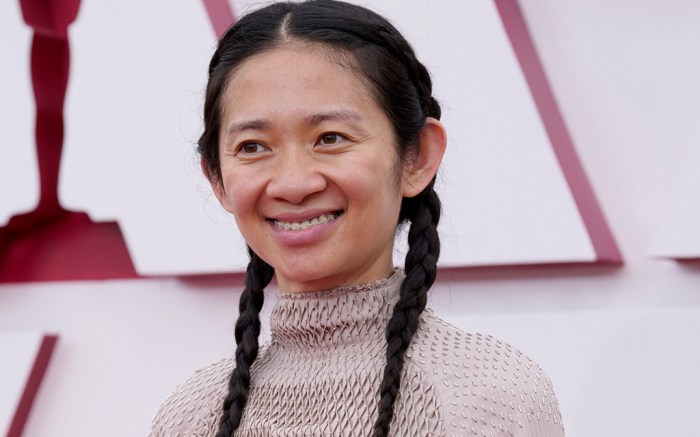 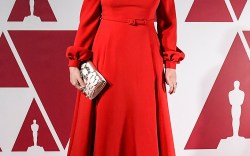 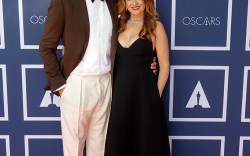 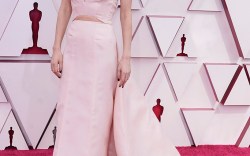 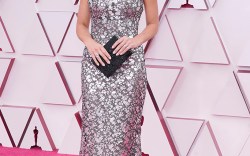 Chloe Zhao made history at the 2021 Oscars on Sunday night in Los Angeles. The “Nomadland” director took home the Oscar for Best Director, becoming only the second woman to ever win the title in the show’s 93-year history. She is also the first woman of color to ever win the award.

Before taking her page in the record books, the Chinese-American filmmaker arrived on the red carpet in a look that too went against the grain. Her ensemble kicked off with a long-sleeve Hermès dress complete with subtle ruching and delicate beading.

The real kicker of the look came with Zhao’s choice of footwear: classic white sneakers. Throughout this award show season, the filmmaker virtually appeared at the biggest events of the year in everything from sweats and tees to relaxed pants and flannel shirts as she cooly sipped tea out of her mug at home. Though they stay in line with her own typical style, Zhao’s sleek leather shoes tonight served as a statement against the typical dress code of the evening.

News broke over the weekend that the show’s producers had advised against casual attire despite the growing desire for more comfortable and relaxed styles amidst the current health climate. Zhao’s sneakers, though, proved to be a steadfast way to stay true to herself, even if it meant breaking away from the rules.

The 93rd Academy Awards kicked off in Los Angeles on Sunday with a slightly new look. Restrictions — and testing — will be in place for the intimate, in-person event with two locations: Union Station and its usual venue, the Dolby Theatre. David Fincher’s “Mank” is the most nominated film with 10 total nods, followed by “The Father,” “Judas and the Black Messiah,” “Minari,” “Nomadland,” “Sound of Metal,” “The Trial of the Chicago 7” and “Promising Young Woman.” Other nominees include Chadwick Boseman, Andra Day, Carrie Mulligan, Leslie Odom Jr., Viola Davis.

Click through the gallery to find more of the best red carpet arrivals at the 2021 Oscars.