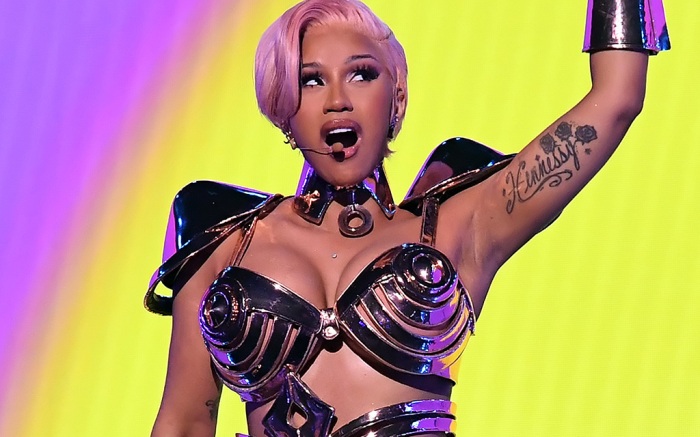 Cardi B took her love for shoes to new levels on Sunday night at the 2021 Grammy Awards. The rapper performed her hit song “WAP,” alongside Megan Thee Stallion and a giant life-size stiletto shoe.

For the performance, which also included a medley of her latest single, “UP,” Cardi B wore a gold armor ensemble and matching metallic block heels. Her futuristic outfit included shoulder and knee coverings that gave off major gladiator vibes. She completed the look with nude fish net stockings and a pink pixie cut hairstyle.

The Reebok brand ambassador could then be seen pole dancing on the heel of a massive platform shoe before heading onto a gigantic mattress to finish her performance.

Cardi B is known for making style statements — especially at the Grammys. Most memorably, she wore a vintage Thierry Mugler look from 1995 to the 2019 awards show, where she won Best Rap Album of the Year. The clam shell dress featured a dramatic ruffle detailing at the waist designed to look like a mollusk shell. It has been one of Cardi’s best looks to date.

“I’ve always been into fashion. Back then, I couldn’t afford what I wanted, now I can. It’s easier and I have more connections with brands,” she told FN. “I could wear the most uncomfortable shoe and I’m just going to take it and love it because it’s fashion, it’s beauty, it’s amazing, it’s different. I get bored, so that’s when me and my stylist [Kollin Carter], we get creative and come up with something new and amazing.”

The 63rd annual Grammy Awards began at 8 p.m. ET on CBS, honoring the best of the best in the music industry for the year. Big winners of the night included Harry Styles, Megan Thee Stallion, Beyoncé, Dua Lipa, H.E.R. and Miranda Lambert. Hosted by Trevor Noah, the show took place in a series of undisclosed locations across Los Angeles with a variety of stages for performers to make their own with proper safety precautions.

To see all the red carpet arrivals at the 2021 Grammy Awards, click through the gallery.