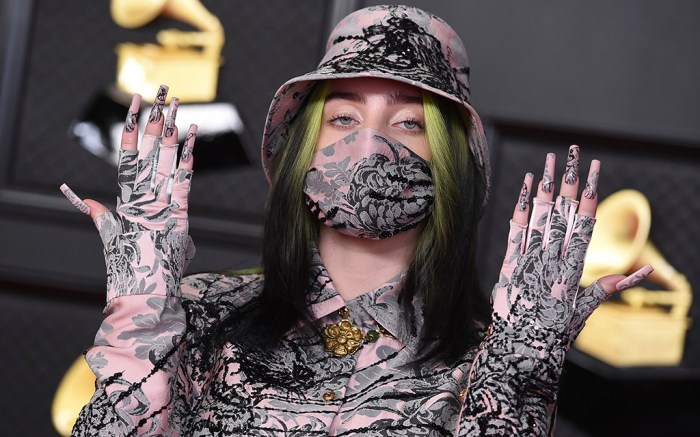 The “Therefore I am” singer wore a Gucci ensemble, which included bell-bottomed pants and a matching button-up shirt. Eilish completed the outfit with coordinating gloves, face mask and bucket hat detailed in the floral brocade design.

She paired the print look with white chunky loafers.

The singer is nominated for four awards tonight, having already won a trophy before the show began for Best Song Written for Visual Media for her James Bond song “No Time to Die.”

During the show, Eilish hit the stage with brother Finneas for a performance of her hit song “Everything I wanted,” which is nominated in the Best Song, Record and Pop Solo Performance categories. On stage, she wore another Gucci design.

Last year, Eilish made her first-ever appearance at the Grammy Awards in a green, glittering Gucci logo number. She stepped onto the 2020 red carpet in Gucci’s Flashtrek sneakers, featuring green jewels, black and green mesh suede and leather paneled uppers.

The 63rd annual Grammy Awards began at 8 p.m. ET on CBS, honoring the best of the best in the music industry for the year. Winners so far included Harry Styles, Megan Thee Stallion and Miranda Lambert. Hosted by Trevor Noah, the show takes place in a series of undisclosed locations across Los Angeles with a variety of stages for performers to make their own with proper safety precautions.

To see all the red carpet arrivals at the 2021 Grammy Awards, click through the gallery.