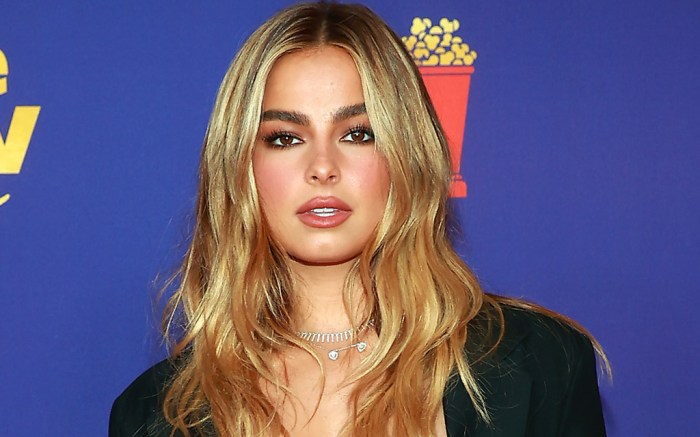 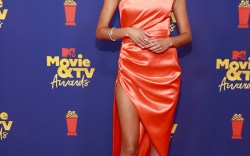 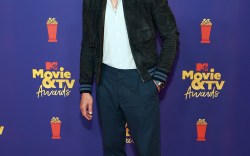 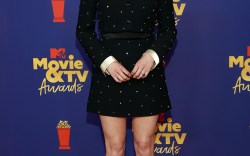 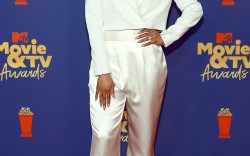 The TikTok sensation decided on a glam all-black ensemble for tonight’s show, modeling a black blazer layered over a daring bralette and coordinating low-rise maxi skirt. All from Christopher Esber’s fall ’21 collection, the Gen-Z star received styling help from the legendary Law Roach, known for his work with Zendaya and Anya-Taylor Joy amongst other major names.

Low-rise skirts and pants were a common sight decades ago as stars elevated their off-duty attire with bold tank tops and bandeau crop tops amongst other major trends. Stars like Kim Kardashian, Saweetie, Sofia Richie and more have been rocking low-hitting bottoms this year with the trend expected to continue into summer.

On her feet, the “He’s All That” star tapped Stuart Weitzman in a pair of towering platforms. Similar designs retail for $425 from the brand.

Tonight’s show honors the best in television and film from the year, airing from the Palladium in Los Angeles tonight at 9 p.m. ET. Leslie Jones hosts the show with appearances expected from Henry Golding, Lin-Manuel Miranda, Yara Shahidi and more. Sacha Baron Cohen will receive the Comedic Genius Award and Scarlett Johansson is being honored with the Generation Award.

Bailey stole the show as well in a Versace look fresh off the spring ’21 runways in Italy; her outfit included a floral skirt and unmissable pink pumps. Also of note was Daviss’ choice of buzzy Air Jordan kicks as well.

When it comes to footwear, Addison Rae’s own bold boots are just one of the many silhouettes in her everyday rotation. In addition to sharing a love for New Balance sneakers with friend Kourtney Kardashian, the Gen-Zer is a major fan of one special silhouette from Nike in particular; the brand’s Air Force 1 sneaker first hit shelves in the 1980s and has since become a cultural icon and must-have footwear style for the younger generation.

On top of trending sneakers, the 20-year-old star has started her own beauty line, Item Beauty, and starred in a recent campaign for American Eagle.

Click through the gallery for more red carpet arrivals at the 2021 MTV Movie & TV Awards.