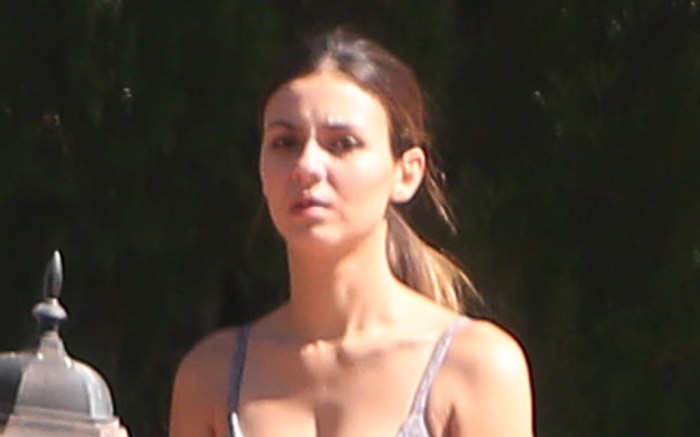 Victoria Justice took advantage of the sunny weather in Los Angeles this week, bringing her workout outdoors with her sister at their personal trainer’s house.

The “Victorious” alumna worked up a sweat on Wednesday in a gray keyhole-cutout sports bra and contrasting neon biker shorts. Biker shorts rose to prominence in 2020 during a newfound appreciation for athleisure and comfortable attire, spotted on the likes of Hailey Baldwin, Tracee Ellis Ross, Emily Ratajkowski and a slew of other major celebs in the past year alone. In 2021, the easygoing silhouette is continuing to remain a staple in stars’ off-duty rotations as well.

As for footwear, Justice completed her own workout-ready look with a set of black athletic sneakers. The streamlined silhouette included seamless monochrome uppers set atop a chunky white outsole.

The “Zoey 101” actress modeled a similar pair of sneakers earlier this month as she was spotted leaving her trainers once more. That time around, Justice decided on a mesh-paneled set of black leggings to kick off her fitness attire, matched to a printed sports bra and her favorite brown hat.

Click through the gallery to see more stars like Victoria Justice with top-notch workout styles over the years.