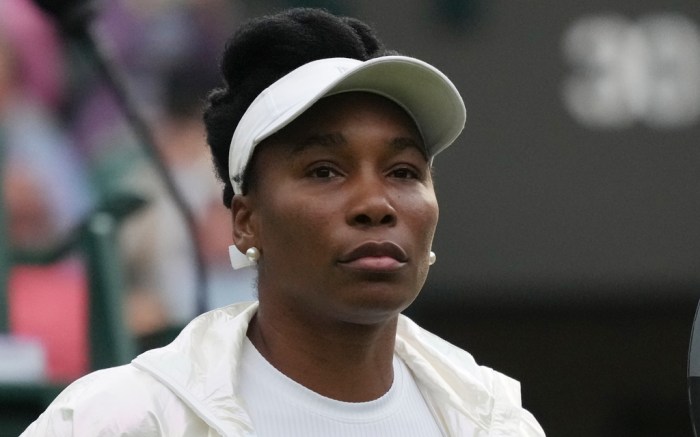 The professional athlete brought together her brand, EleVen by Venus, and activewear retailer Carbon38 for a whole new collection of must-have workout gear. To promote the collab, Williams herself broke out a matching triangle sports bra and tennis skirt set; both pieces came coated in a cotton candy pink and blue tie-dye print. Fans of the look can shop the skirt for $88 with the sports bra available for $78 at Carbon38.com.

To round out the look, Williams of course had to slip on a set of tennis shoes from K-Swiss. The tennis star joined forces with the brand in November 2020 as an official ambassador and has since released a series of collaborations with her own label and the American heritage brand.

“When I think of K-Swiss — from when I was younger until now — I think of classics. It works with everything. It’s based on the California lifestyle, and I’m from California,” Williams told FN during her exclusive interview in May. “They’re open to creativity and new ideas. The design is incredible. With all those different aspects, it’s a perfect fit. I love being able to dive in to the archives. You look at 30 shoes together and your head spins. Their archive is just sick. I love the juxtaposition between the ’70s, ’80s and ’90s shoes. My personal favorite is the ’90s silhouette.”

On the court, Williams of course opts for designs from her own label as well as Wilson, for which she serves as an ambassador. According to Forbes, Venus Williams’ many endorsements include previous deals with Wilson, Electronic Arts, Kraft, Ralph Lauren and Tide. Tied for 10th for the Highest-Paid Female Athletes of 2019, Venus’ total earnings racked her up $5.9 million with endorsements accounting for $5 million alone. And that’s not all: the athlete started her own YouTube channel last year and can bank up to six figures per appearance on the speaking circuit.

Recreate Venus Williams’ chic tennis look in these next pieces.

Click through the gallery for more of Venus Williams’ bold style over the years.