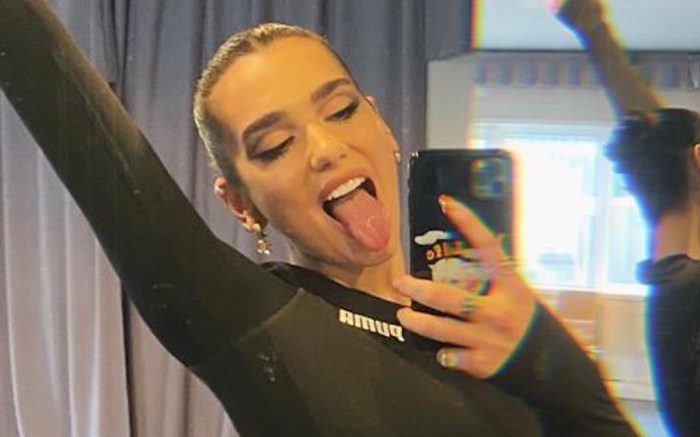 Dua Lipa demonstrated an effortless way to blend athleisure pieces and spring trends this week with a little help from Puma.

The brand ambassador posed in what appears to be a dance studio in Los Angeles yesterday, giving her take on monochrome styling. Her outfit included a 2000s-style spaghetti strap tank top from the German athletic brand matched to coordinating black sweats; similar sleeveless shirts retail for $30 at Puma.com.

When it came down to footwear, the “New Rules” singer opted against expected running shoes or pool slides and instead choice trending boots. The sleek black pair came set atop a sturdy block heel with a mid-calf height and a blunt square toe.

When she isn’t in trending boots, though, you can now find Dua Lipa in lots of Puma sneakers. The British musician signed on as a Puma ambassador in 2020 with a multi-year deal as she serves as the face of its women’s business. Through her new title, the musician will aim to “help inspire women around the world” through world-wide efforts and “important inclusive initiatives close to her heart,” according to the company.

Beyond a Grammy Award-winning music career (and an impressive six new nominations for the upcoming 2021 Grammy Awards), Dua Lipa dips her toes in the fashion world quite often. From sitting from rows at major shows during Fashion Month to selecting daring duds for red carpet appearances, she keeps things regularly exciting. The “Levitating” singer previously appeared in campaigns for YSL Beauté and Fragrance, Adidas and Pepe Jeans amongst others.

Hop on the square-toe shoe trend like Dua Lipa in these similar pairs.

Click through the gallery to find more of Dua Lipa’s wildest looks throughout the years.