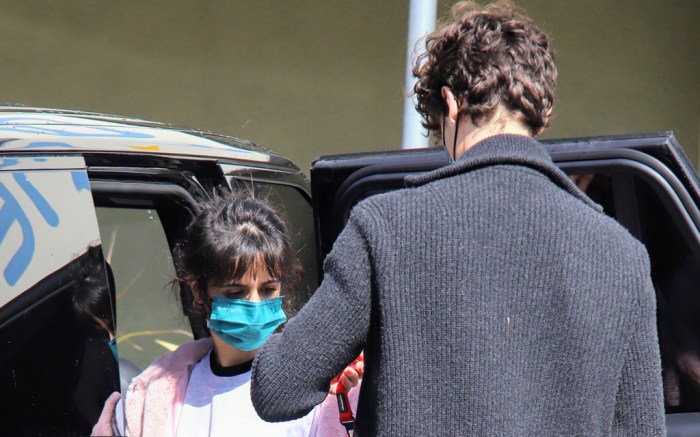 Camila Cabello and Shawn Mendes showed off their coordinating couple style as they took their dog for a walk and an errands run this week.

Heading out in Los Angeles yesterday, the two musicians modeled comfy cozy attire with their furry friend. Cabello herself layered a fuzzy pink jacket over a white sweater and black paneled joggers for her choice of ensemble.


As for footwear, the “Señorita” singer tapped Nike in a set of classic black and white kicks. The two-tone pair featured soft uppers and a textured outsole, with similar styles from the Swoosh brand retailing for $65 at Nike.com.


Mendes followed suit in Cabello’s choice of attire, teaming a chunky gray knit zip-up sweater with blue sweats and a matching teal face mask. The “Wonder” singer’s own pick of Nike kicks bears resemblance to the label’s Blazer Low silhouette with leather uppers and a contrasting navy Swoosh accent; formed with a b-ball inspired look, the design retails for $85 online.


As for Camila Cabello’s own style, the “Cinderella” actress tends to include footwear styles from a wide range of brands — think everything from Converse to Naturalizer to Ivy Park x Adidas to Christian Louboutin. When it comes to red carpet duds, the star prefers designs from Zuhair Murad, Versace and Givenchy amongst other major labels.

Click through the gallery to find more of Camila Cabello’s wallet-friendly shoe style over the years.