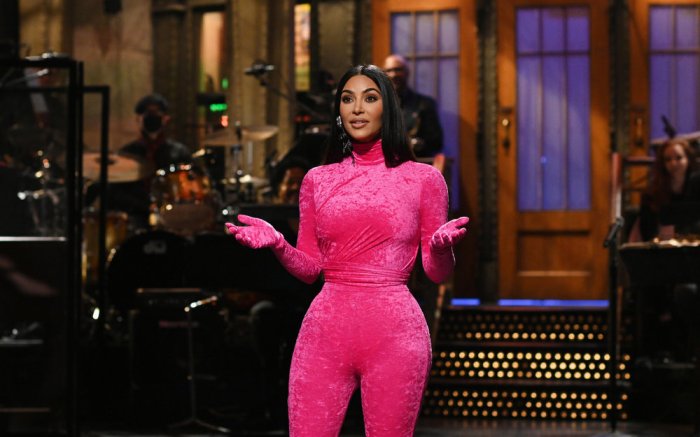 Kim Kardashian made a splash during her “Saturday Night Live” debut last week. Now, the star’s outfit is raising a variety of searches, according to Lyst.

During her opening monologue, Kardashian wore a pink velvet bodysuit with attached gloves and pointed-toe heels from Balenciaga. The outfit was similar to several of the brand’s pink catsuits in different fabrics, but similar silhouettes, that she wore before and after her “SNL” debut. The KKW Beauty founder’s outfit spiked searches for “velvet catsuits” by 117% in under two days, according to Lyst. “Balenciaga” searches also rose by 47% during this time.

Shoe-wise, Kardashian’s pointed hidden heels were most akin to sock boots — which regularly feature structured heels or pumps with loose uppers like knee-high socks. Her footwear caused searches for “sock boots” to skyrocket by 61% over the weekend.

Finally, the former “Keeping Up With the Kardashians” star’s series of pink Balenciaga outfits, naturally, increased searches for the color pink. An 82% rise in searches occurred from her “Saturday Night Live”-related outfits.

Coined her “Balenciaga era” on social media, it’s clear that Kardashian’s most recent outfits have been directly influenced by the Paris-based brand under Demna Gvasalia’s creative direction. In recent weeks, the majority of her looks have incorporated oversized outerwear and top-handle bags from the luxury label. Most prominently, however, have been her slim-fitting pants with attached heels, pointed-toe boots and full-coverage bodysuits like those she wore while filming “Saturday Night Live.”

See more of Kim Kardashian’s style over the years.