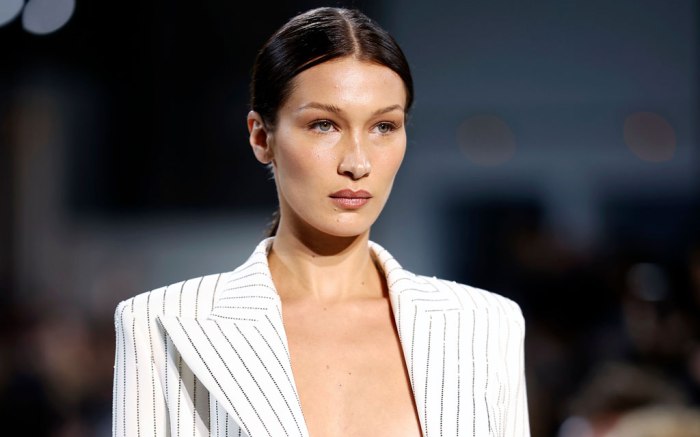 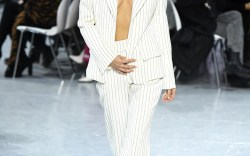 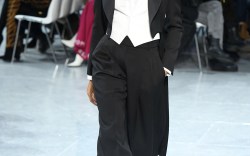 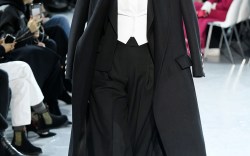 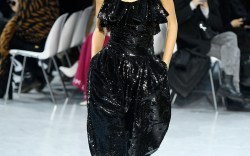 FN’s Designer of the Year, Amina Muaddi also creates the shoes for her friend Alexandre Vauthier’s line. For his spring ’20 couture collection that walked the runway today in Paris, she created both a brand new logo jewel and a new heel silhouette to boot.

“I developed an accessory shaped a bit like a diamond,” she told FN. “It represents the AV of Alexandre Vauthier put together as a jewel on the body of the pumps.”

She also made a miniature version she added to the buckle on the straps of the sandals. “It’s really pretty,” she cooed. “The T-strap crystal pump and the lace up sandal with the crystal buckle are definitely my favorite shoes in the collection.”

Bella Hadid who walked twice in the show wore the T-strap option for her second look, an androgynous pinstripe pantsuit. Both Hadid sisters, in fact are fans of Muaddi’s own eponymous label.

The new heel she developed for the Vauthier show is cone-shaped. “We decided to do it for a more of a stronger silhouette,” she said.

Elsewhere came big slouchy boots with crystal pompoms that you can wear high or scrunched up and thigh high crystal boots that also came in a giraffe print motif to match some of the fabrics in the show.

“Glamorous sophisticated and feminine but fierce at the same time,” is how she described the show’s footwear. “And I like that,” she added.