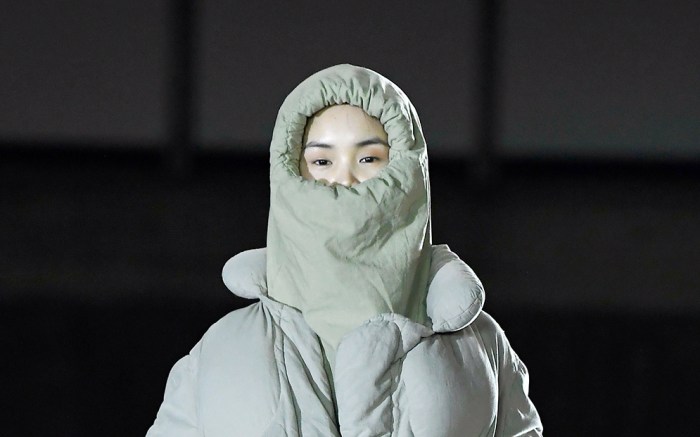 When the invitation arrived for Kanye West’s surprise Yeezy Season 8 show at Paris Fashion Week, there were two mysterious gifts: fake rattlesnake eggs and sage sticks. “Here’s a little piece of our home in Cody, Wyo.,” read the paper, which came from the West family, who has taken over the mountain town.

On Monday evening, it all became more clear when hundreds of worn-out fashion insiders were handed blankets as they arrived for the 9:30 p.m. show. The crowd was directed to wait on a steep hill at the Espace Niemeyer, which happens to be the Paris headquarters of the French communist party.

Temperatures had already fallen into the low 40s, the grass was damp from days of rain and some editors vowed to leave if the show didn’t start by 10 p.m. “Only Kanye would think this was a good idea,” one lamented. (There were immediate flashbacks of West’s Yeezy sweltering Season 4 show at Roosevelt Island, when models fainted and guests got trapped on buses.)

By 9:45 p.m., a cacophony of car horns replaced the usual show soundtrack and things got underway.

The boots made another appearance when North West paired them with a purple puffer jacket to close the show, rapping on the runway as she stood next to her proud dad. It was worth the wait — but next time he has a show in March, in the middle of a Coronavirus outbreak, Kanye would be wise to hold it inside.

Click through the gallery to see all the runway looks from the Yeezy Season 8 show.