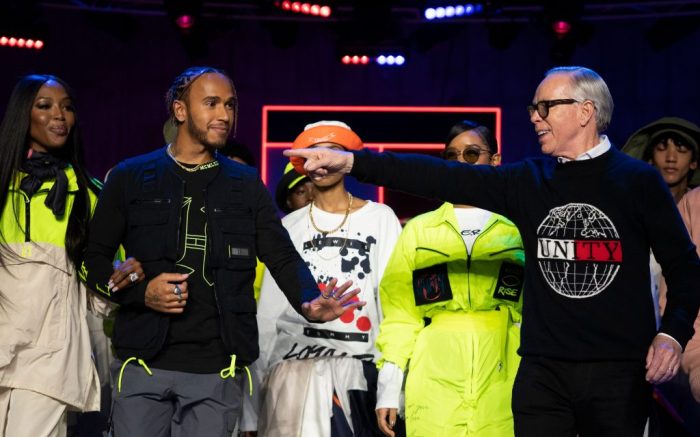 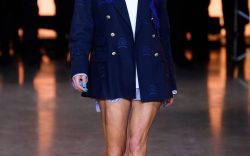 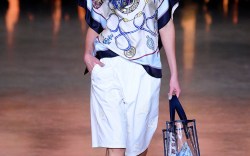 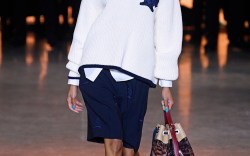 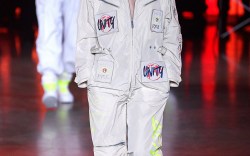 Tonight in London the Tommy Now circus rolled into town for Tommy Hilfiger’s ‘see now, buy now’ show at the city’s Tate Modern Gallery. It also featured collaborative capsules with Lewis Hamilton and H.E.R. Soundtracked by a live acapella group, it was quite the line-up. Naomi Campbell opened the show alongside models of all shapes and sizes. The cast also featured Alessandra Ambrosio, Candice Swanepoel, Winnie Harlow and Luka Sabbat.

Just two hours earlier, amidst buzzing backstage preparations, Footwear News sat down with Hilfiger and his collaborative partner of four seasons, Lewis Hamilton, to talk next level sustainability and how their three-way collab with H.E.R. took shape.

This is now your fourth collaboration, how are you going to take sustainability to the next level?

LH: We found new vendors, new ways of working with technology and new materials. The collection is now up to 75% sustainable — using plant-based fabrics. All the t-shirts are 100% organic cotton, our down is all plant-based and our shoes are vegan. It’s a really tough process but we’re really trying to push the boundaries, the limits and the technology. And the next time we’re going to take it even further.

TH: Because Lewis is vegan and he’s an animal lover, he really pushed the idea of sustainability. We were already on the road but he gave us the impetus to push it even further. We’re not at 100% yet but we’re going to get there.

Are consumers willing to pay more for sustainable products?

TH: I don’t think the price jump should be dramatic. We’re not going to overcharge the customer as we want to be fair with them but we really believe sustainability is what the customer wants now.

LH: Education is really key as well. We are in a process and it’s really important. I went vegan three years ago and it’s also about understanding the effect that the fashion industry can have on the world. I’d like us to be one of the leaders along with people like Stella McCartney who I’m massively inspired by to really set the tone and push for that so the other big brands will follow.

What drew you to collaborating with H.E.R. and how did the magic happen?

TH: We were thinking of bringing someone else in to do a three-way collab and we think H.E.R. is one of the next big R&B stars. We both think she’s an incredible human being, she’s got a great sense of style. So we thought as we evolve the whole brand, it would be a cool thing to do. I met her in Cannes at the Film Festival and asked her what she thought and she told me she definitely wanted to do it.

LH: Well I’m a big fan of her music so when it came [time] to sit down to brainstorm ideas about who to work with, I thought I’d love it to be her because she’s got that really raw beautiful, soulful voice and her personality and her style [are] so unique. So I put that on the table, we all agreed and we reached out to her. What was crazy was that I was in a music studio in in L.A. and I walked in to see one of my producer friends and she was working with him and that was before we got the deal done. I told her we were working with the Tommy team to bring her in and she was like, “I know and I’m so excited.” So it was really natural.

The LFW Fashion and Footwear Trends Everyone’s Talking About

Why Victoria Beckham’s New LFW Boots Are Already Must Haves