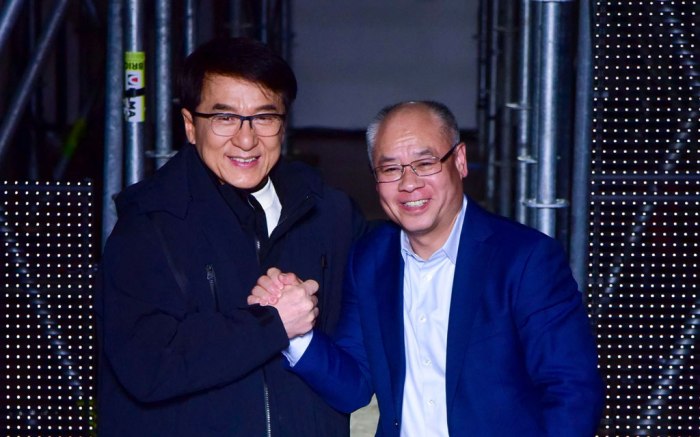 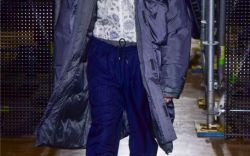 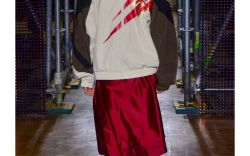 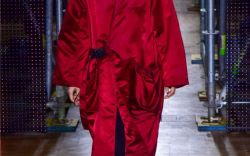 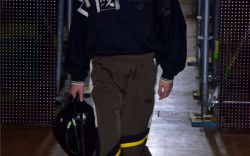 Chinese sportswear label Li-Ning didn’t pull any punches on Saturday when it came to celebrating its 30th anniversary.

Strike one: it commandeered Paris’ Pompidou Centre to stage its fall ’20 fashion show.

Strike two: The show opened with a capsule collection done in collaboration with the legendary Jackie Chan.

The show was divided into two parts. First up the 10-piece Jackie Chan capsule which featured both apparel and footwear. Looks in a black and beige palette took inspiration from the world of Kung Fu (also channeled by Sandra Choi in her own Bruce Lee inspired fall ’20 collection), combined with utility and military surplus.

The second half was all relaxed athleisure with plenty of quilting and sneakers done in vibrant day-glow neon shades.

As for Dwyane Wade’s contribution, this came in the shape of a space-age hightop with neoprene cuffs. The shoe, the Reburn II is part of an ongoing partnership with Li-Ning and Wade’s own label Way of Wade.

“It’s a great opportunity to be more involved in the creative design,” he told FN. “We’re channeling an Apollo 13 vibe with a spaceship look to it.”

@lining.official also unveiled a shoe done in collaboration with @dwyanewade @wayofwade and here’s the main man to tell us all about it. 🎥 @stiffyhm #lining #dwyanewade

Having recently retired from basketball, he said it’s all about, “finding things that interest me and make me want to jump out of bed every day.”

Founded in 1990 by the eponymous Olympic gymnast, Li-Ning is the biggest sportswear brand in the world on the Hong Kong stock exchange. Earlier this month, the Random Identities show at Pitti Uomo unveiled the second wave of Stefano Pilati’s partnership with the label, closely followed by a collaboration with Neil Barrett at Milan Men’s Fashion Week on Saturday.