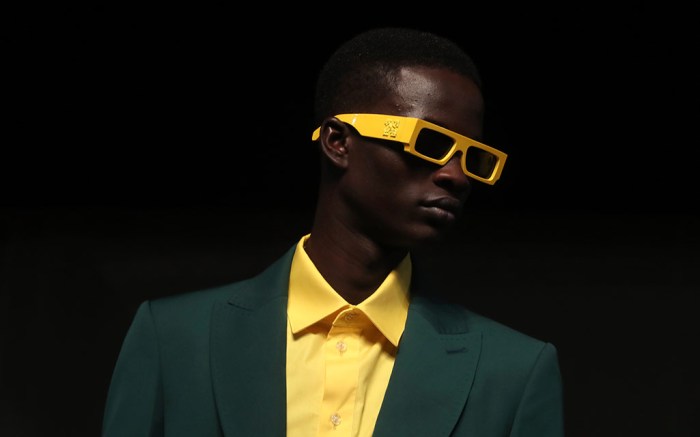 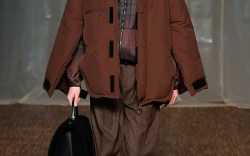 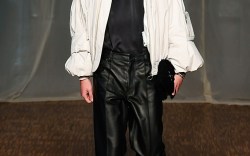 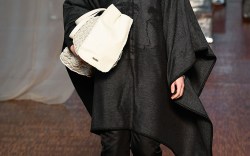 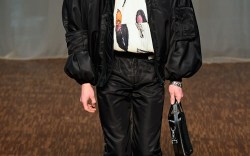 Virgil Abloh made a dramatic return to the Off-White runway this morning in Paris. The designer, who showed in absentia last season due to taking a medical leave, emerged from behind a translucent curtain in the middle of his Louvre museum venue to take his final bow.

Blink and you might have missed it, but amongst his 34 looks, FN spotted a pair of his latest work with Nike: The anticipated Off-White x Air Jordan 5 collab. Although not confirmed by Abloh, Off-White or Jordan Brand, potential release date chatter online has this sneaker arriving in April. A rumored 46,000 pairs will be made with a price point of $225.

The sneakers came teamed with a pair of baggy jeans with utility-style pockets like an integrated fanny pack and were covered in skid marks as if they’d been driven over by a motorbike.

Given the current frustration leveled at Paris’ traffic gridlock from to the continued transportation strike, this isn’t beyond the realm of possibility.

Either way, we have reached out to the brand and are currently awaiting intel regarding a potential new partnership.

Other shoe news of note was the appearance of a mismatched pair: a white sneaker and a black laceup — both of which featured blue sneaker-style soles.

Abloh posted a preview shot of them on his Instagram feed over the weekend which he captioned his “plot twist” shoes. this is the pair. one of each, none of the other.’

There is currently much debate among the style set as to whether the sneaker has had its day, and we’re about to see a return to more formal footwear or whether it’s set to go the distance.

As for Abloh, who will also show his Louis Vuitton men’s collection tomorrow, he’s sitting on the fence.