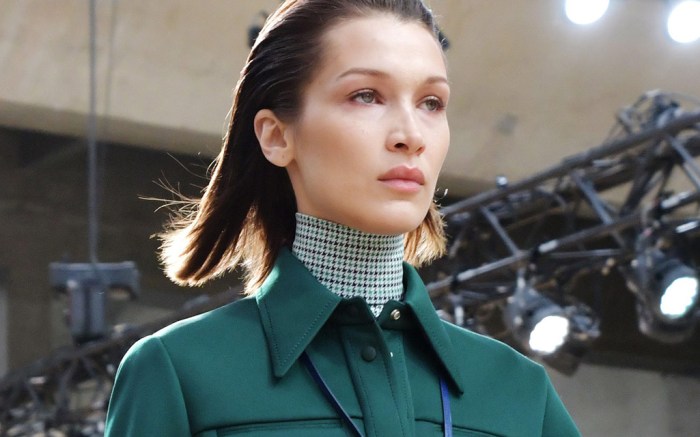 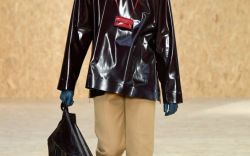 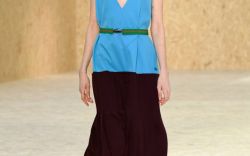 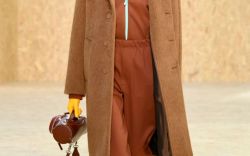 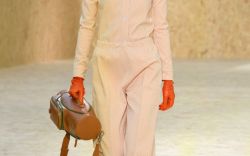 Lacoste creative director Louise Trotter has introduced a brand-new hybrid shoe, a fusion of the label’s original T-clip tennis sneaker and a golf shoe. Done in the optimistic palette of her ready-to-wear lime — think: green/white and claret/Pepto-Bismol pink — they come with a golf kilty over the laces and the brand’s famous crocodile logo on the side.

Kilties are used by golf players to prevent their shoes from getting muddy on the course. Trotter’s kilty is also detachable so you can switch your color combos or remove it altogether for a more casual effect.

There were also smart leather loafers with the same kilty feature and embossed white croc pairs, as seen on Bella Hadid, who opened the show.

Trotter’s fusion of tennis and golf gear was inspired by the powerful love story between brand founder, tennis champion René Lacoste, and his wife, golfing champion Simone de la Chaume. Together, they were a poster couple for sexual equality.

“Usually in a relationship there is one person who is the more powerful than the other, but they were both powerful in their own right and complemented each other as their relationship was really harmonious,” Trotter told FN backstage.

Since Trotter joined Lacoste from Joseph, the British designer has been putting a softer, more feminine stamp on the label while injecting it with a new sartorial finesse. Her fall champions included the dropped box-pleat skirts and tailored tweed pants that she teamed with elongated knitted vests.

“Lacoste is a brand that has created classics that have become heritage pieces, so I wanted to think about how you wear those pieces today,” she mused, at the same time considering what future classics might look like. One of her answers was a double-knit take on the house classic polo shirt.