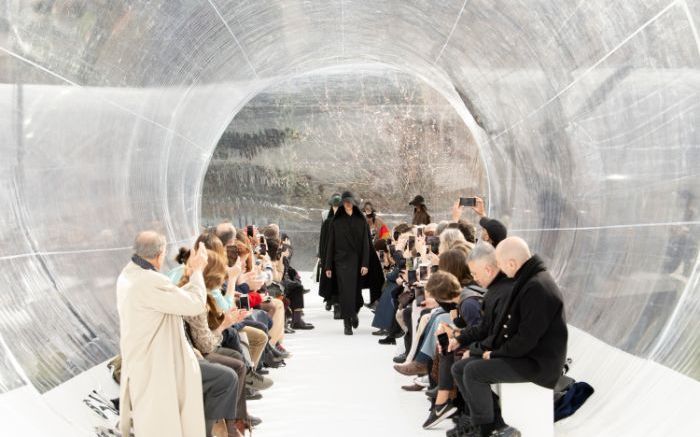 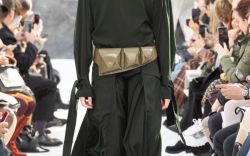 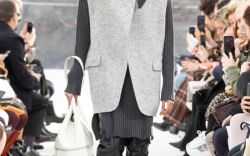 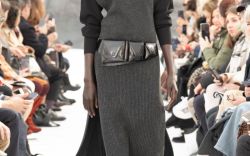 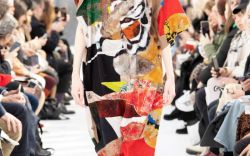 Kenzo’s founder Kenzo Takada is often considered to be the founding father of streetwear. And today in Paris, the brand’s new creative director Felipe Oliveira Baptista delivered a version of streetwear 2.0.

The former Lacoste designer certainly has expertise when it comes to the streetwear genre. During his decade at the brand he doubled its turnover to approximately $2.1 billion. He also spearheaded Lacoste’s ongoing collaborative partnership with Supreme. That was evidently music to the ears of Kenzo’s parent company, LVMH.

Now in his new role, Baptista showed a streetwear (and Kenzo) staple — the oversize sweater — reinterpreted in full-length form as a tabard, or tunic-like garment, emblazoned with a collage of giant tiger heads. It wasn’t the official Kenzo tiger, but rather, prints from the oeuvre of the late Portuguese artist Júlio Pomar.

A new elongated silhouette ran throughout the coed collection. Long-line coats, capes and long-sleeve evolutions of the usually sleeveless tabard, with nods to the African kanzu, traditionally a long white men’s robe, were the sartorial mainstays.

Printed anoraklike cagoule dresses came in what appeared, from a distance, to be colored camo print. Upon closer inspection, it was revealed to be a rose motif drawn from the Kenzo archives.

A nomadic, global spirit and cultural exchange lies at the heart of Kenzo, whose founder emigrated to Paris from Japan. Baptista teamed archive inspiration with that, derived from his own photo albums, including traditional costumes from the Azores, where he grew up, and a shot of his parents skydiving in Mozambique.

For footwear, wedge-style boots featured elasticated cuffs at the ankle or drawstrings on long-line ruched variants with a nod to waders. There were also rubberized ankle boots that lashed around the leg.

Interestingly, there were no sneakers in the show. Maybe they’re not part of the streetwear 2.0 deal.

Garments and footwear alike evoked the idea of protection and were replete with functional elements. Headwear, too, came with attached flowing capes like garments worn in desert terrain.

Indeed, the notion of climate change was never far from the mind. After all, extreme weather conditions, once the preserve of far-flung climes, are now commonplace. Fittingly, in an effort to be more environmentally responsible where production is concerned, the show itself took place in a transparent tubular structure that can be packed away like a tent until its next outing. Likewise, there was a reusable water bottle for every showgoer.

As Paris Fashion Week Opens, the Shoe Industry Is Paralyzed by Coronavirus Shutdown in Italy