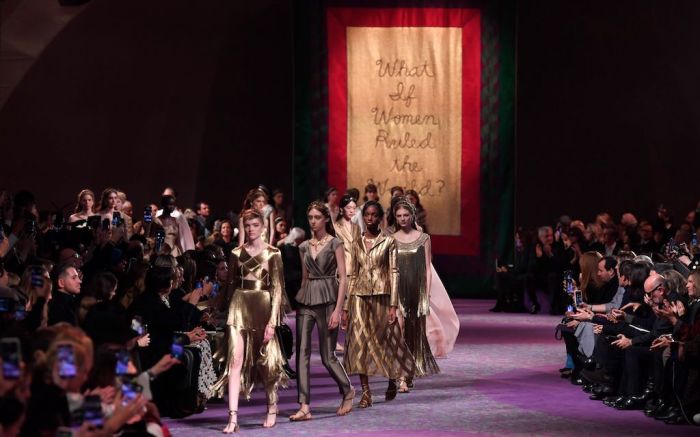 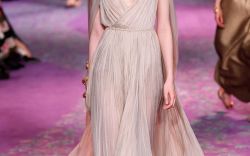 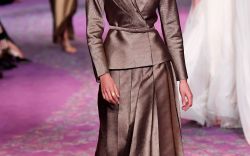 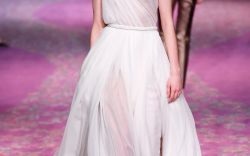 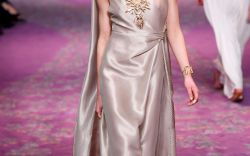 If the overriding question posed during men’s fashion month was ‘what does it mean to be a man?’ Maria Grazia Chiuri’s Dior spring 2020 couture show posed some questions of its own.

What if Women Ruled the World?

Would God be Female?

Would Both Men and Women be Equal?

The collection was unveiled today on the grounds of Paris’s Musée Rodin, inside a giant site-specific inflatable by American feminist artist Judy Chicago. It was titled The Female Divine.


Aforementioned questions were posed via hand-embroidered banners, which came suspended from the ceiling like homespun protest posters. Also designed by the artist, they were made by women in a school in India in a bid to support the county’s female students.

Chicago’s most famous installation, The Dinner Party, featured hand-painted plates depicting women’s vulvas. But while these were extremely tastefully done, they might still have been a bit extreme for the Dior Couture customer. The giant inflatable was closer in shape to a female reproductive system, if biology lessons serve us correctly.

According to the show notes, the collection was “a tribute to an ancestral [female] power that goes beyond the idea of procreation.” So basically the message behind the show was that a woman is more than just a womb.

Activism has been a Chiuri signature since she started at Dior. You’ll remember those “We Should All Be Feminists” T-shirts in her very first collection of 2016, the “Global Sisterhood” versions on fall ‘19 and the “Non, Non et Non” of fall ’18 which marked the anniversary of the 1968 Paris student protests which inspired the collection.

They came wrapped with braided cords which were echoed in the rope or leather weaves of the show’s flat sandals. Ears of wheat, another key collection motif symbolic of a woman’s creative force, appeared as dramatic jewelry pieces and also adorned some of the shoes.

As for the final look, that was a gown featuring an embellished circle around the womb area. More subtle than a protest T-shirt but just as powerful.

So here’s another question, which statement-making celebrity will be the first to wear it on the red carpet? Elisabeth Moss, Jennifer Lawrence, Jessica Chastain? It’s over to you.

From ‘Ugly’ Sandals to Square Toes: 13 Fashion and Shoe Trends Everyone Will Be Wearing in 2020

How Genderless Fashion Changed the 2010s