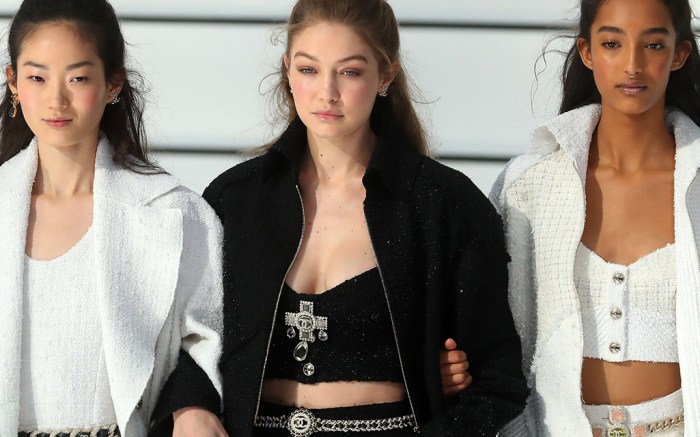 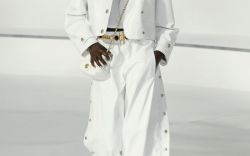 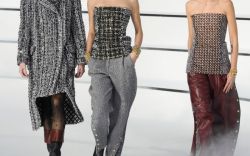 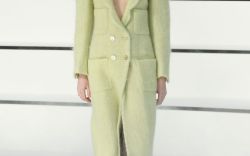 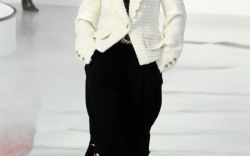 The mantra “one for all, and all for one” came to mind today following the runway show for Chanel fall ’20. After all, every single look in the collection was teamed with a pair of musketeer-style boots. They came in black with a structured brown turn-down top, almond-shaped toe and Cuban heel.

Musketeers were the musket-equipped foot soldier protagonists of Alexandre Dumas’ novel “The Three Musketeers” and were evoked by the trio that closed the show.

Hadid’s tweed lurex coat had the look of a 17th-century frock coat with a contemporary bomber jacket-style zip closure. Viard’s collection riffed on this androgynous historical idea throughout, giving it a 21st-century streetwear twist in both her silhouettes and use of fabrics.

Her clever track-pant take on the knickerbocker came with a drop crotch and wide legs with buttons running up the side. They were done in glossy leather, denim and Chanel-staple jersey knits.

“The Three Musketeers” was an adventure story with political undertones. Author Alexandre Dumas was pro-establishment, and his protagonists, members of the National Guard, were charged with maintaining the status quo.

As timing would have it, as the Chanel show took place, protests against the French government’s pension reforms were getting underway outside the nearby Palais Bourbon, home of the Assemblée Nationale, the French parliament’s lower house.

Just as with fashion, history is also cyclical — and has a habit of repeating itself.