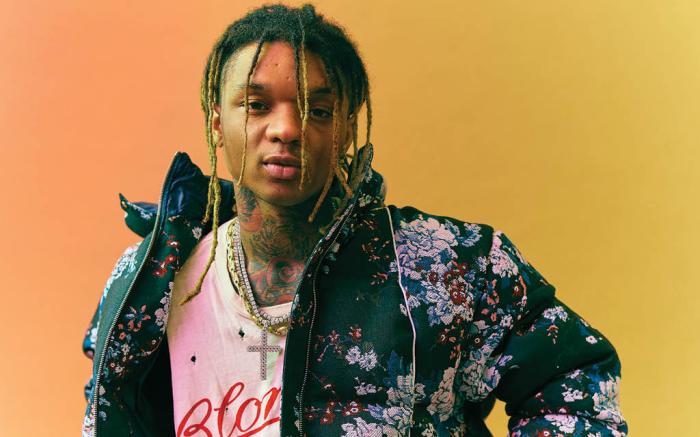 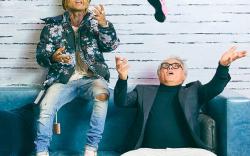 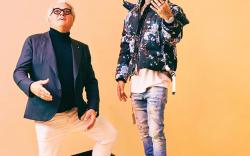 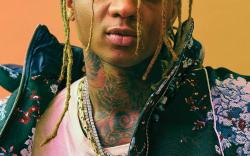 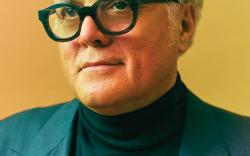 As soon as Swae Lee stepped onto the men’s shoe floor at Saks Fifth Avenue in Miami recently, it was pandemonium.

The rapper, flanked by two hulking bodyguards and Miami police officers, paraded through the crowd in his large Kith floral puffer jacket before disappearing into a sea of teenagers on a quest for selfies.

The one half of sibling hip-hop duo Rae Sremmurd has garnered praise lately for his solo endeavors, whether it be co-writing Beyoncé’s “Formation” song or hitting the red carpet in his unique signature style that’s breaking gender stereotypes.

“A lot of [rappers] are f**king scared to wear s**t. They want to think the old ways and put a limit on that s**t,” he said matter-of-factly. “I’m not scared to be different.”

Swae was in town kicking off the Super Bowl weekend at Saks’ Brickell City Centre location with the launch party for his first foray into design: a collaboration with Giuseppe Zanotti.

As the designer captured the scene on his phone, Swae finally emerged from the crowd on top of Saks’ glass display case wearing their bubblegum pink heeled booties.

The mob cheered as Saks employees were frantically trying to gain control. “We need a single file line,” store associates whispered. At the same time, Swae was living in the moment, shouting, “Stop the music!” He was able to get an “I love ya’ll” in before being drowned out again by screams.

An hour before, the 24-year-old was giddy with excitement. As he sat in the private dressing room, Swae pulled out his phone to Instagram Story his name plastered on the door.

“Even growing up, we used to rap about Giuseppes. Everybody in the hood wanted them,” he told FN between bites of oxtail and cabbage. “We couldn’t afford it, so you were a real high-end dude if you wore Giuseppes. You were going to make a lot of noise and turn heads if you came through wearing them.”

The artist grew up in Tupelo, Mississippi, and began making waves in music with Rae Sremmurd’s first single, “No Flex Zone,” in 2014. The duo’s follow-up song, “No Type,” proved they were music’s hottest new act after earning the duo their first late night appearance on “The Tonight Show.” “That should have been No. 1,” he quipped as a bleached dreadlock fell in front of his face.

Being on top of the charts has made an impression on the young artist. Rae Sremmurd’s album went platinum and the band’s 2016 hit “Black Beatles” took the top spot on the Billboard Hot 100 chart. “[Our song] started one of the biggest viral videos, too. The Mannequin Challenge. You feel me?”

Now, Swae is hoping his musical success will translate to fashion. With his brother, Slim Jxmmi, the two became brand ambassadors for Reebok, fronting the company’s Classic Leather campaign in 2017, for instance. For fall ’19, the musician partnered with ASOS to curate a shoppable style edit. And last month, he took his fashion game to the next level by teaming up with Zanotti on a limited-edition shoe collaboration featuring canvas boots, suede loafers and sneakers, detailed in embroidery, glitter and floral motifs. It was a project that saw two very different worlds collide.

While this was Swae’s design debut, it was yet another opportunity for Zanotti to connect with a rising star. It’s a talent he’s mastered over the years, collaborating with the right artist at the right time, such as Kanye West and Beyoncé.

“The perfect collaboration is about respect,” said Zanotti. “We need to balance each other. That’s why I need to know the person. It’s not enough to read a story. I have to touch, find that chemistry.”

At Saks, their friendship was unmistakable. The two hugged and high-fived their shoes together during the FN shoot. Zanotti showed Swae how to fit their footwear on customers eager to buy a pair. The rapper even poured Zanotti a shot of Don Julio 1942 to toast their partnership.

The designer said prior to working together he watched Swae’s videos, listened to his music and studied him. “I thought, ‘Why is this guy so elegant?’ With dressy shoes and jackets. It’s crazy. And his hair and tattoos. He’s a modern artist.” Zanotti continued, in his charming Italian accent, “Swae is young. He’s the new generation. He has something different than others. It’s crazy in a good way. Sometimes absolutely opposites work.”

From the get-go, Swae Lee was involved in the design process, from providing his own sketches of the shoes to meeting Zanotti in person in Paris. The rapper isn’t a stranger to collaborating either. He’s worked with artists including Post Malone, Madonna, French Montana, Drake and Travis Scott. In fact, Post Malone and Swae were just nominated for Record of the Year at the Grammys for their No. 1 hit “Sunflower.”

Although, design is much different from music, Swae explained. “I was making something to go on someone’s body, to complete their outfit. The shoe completes a look,” he said. “It was up to me to make the most key part of the outfit so it was way different. Now I’m helping people with their well-being. This is their image. That’s important.”

When it comes to building an image, Swae has helped usher in a new era in hip-hop.

Long gone are the days of baggy pants, oversize jerseys and nostalgic ’90s athleticwear, thanks to artists such as himself, Lil Nas X, Post Malone and A$AP Rocky, who are all redefining fashion. Swae Lee has shown that self-expression through style doesn’t need to be defined by sex, and he’s continued to break gender norms with his eclectic aesthetic.

Just last month, he hit the Grammys red carpet wearing a Peter Dundas women’s ensemble, which consisted of white wide-leg trousers and a matching robe jacket, both embellished with silver and crystal art nouveau embroidery. He completed the outfit in a pair of his own Giuseppe Zanotti collaboration boots, which happen to have a heel.

“I love that he wore something so different and refreshing,” said Jerome Lamaar, a lifestyle expert and design director of Beyoncé’s Ivy Park x Adidas launch. “It felt forward and personalized and beautiful. Everyone wants to say ‘fluid’ these days, but it feels so true to who he is as an artist.”

For Zanotti, Swae’s feminine vibe first came as a surprise, but working with the rapper allowed the veteran to experiment with a new generation that’s pushing boundaries and creating a new normal in fashion.

“He asked me to do flowers. Usually the rule with flowers is that they are more feminine. It’s very strange for a sneaker. He also asked us to do a pale blue boot with a pink rose. I was confused,” said Zanotti. “But in this moment in time, there’s no more gender. There’s no sneaker for men or women. It’s the same. This collection is feminine but masculine in a different way. Welcome to the present.”

Swae’s fashion sense runs the gamut. He has a closet filled with 2,400 shoes, from Nikes and Yeezys to luxury labels, and many pairs are still in tissue.

“If you look good, or just feel like you look good in something, you should wear it. My style is like — I’m wearing basically blouses. I ain’t gonna lie, but they look unisex to me. If I can pull it off and make it like you can’t tell what sex it is for then [I’m going] to put it on,” he said.

After working with Zanotti, Swae is looking forward to making a bigger statement.

“Definitely, this is the next step for real,” he said, noting that Kanye West could be a potential mentor. “I should reach out to him now. He’s such a smart guy. He could give me real pointers [because] I never got in and got creative until now. I learned that it takes a long time to make and to get the physical shoe. If you want to change something, it will take months.”

Lamaar said the young star, who has 8.5 million Instagram followers watching his every move, has resonated with fans because of his authenticity.

“You can tell what he wears is what he wants to wear. The way he uses colors, sparkle, flowers — it feels right,” he said. “Fashion isn’t going to be fluid or nonbinary. It’s just going to be great clothes that people want to buy and wear. It definitely is the new normal and it’s important. Look back to early days of hip-hop. It was androgynous, reminiscent of rock ‘n’ roll. Now it’s almost full circle. It’s flamboyant, it’s flashy, it’s creative. Swae Lee gets it.”

And he’s not afraid to own his influence, whether it’s creating his unique sound or bringing back scrunchies, Swae knows he’s a force.

“A lot of people be biting my swag. I’m definitely one of the most influential rappers when it comes to my style. Even to the music. We be setting trends, so it’s important to be involved in fashion because I feel like I’m pushing it forward in a big way,” he said. “Companies need to reach out to different genres, not just pop, artists from different worlds and come-ups and backgrounds. Even hip-hop, it has a lot of pull on what people wear. We have influence.”

Next up, Swae is continuing to tour the U.S. throughout the spring alongside Post Malone and will take the stage at New York’s Governors Ball Music Festival in June. Fans are also awaiting his highly anticipated solo studio album, which is expected to drop later this year. In the meantime, he plans to continue to set himself apart from the pack — and that means not worrying about what people say.

“I want to be known for doing what makes me happy and just making the dopest s–t,” he said.