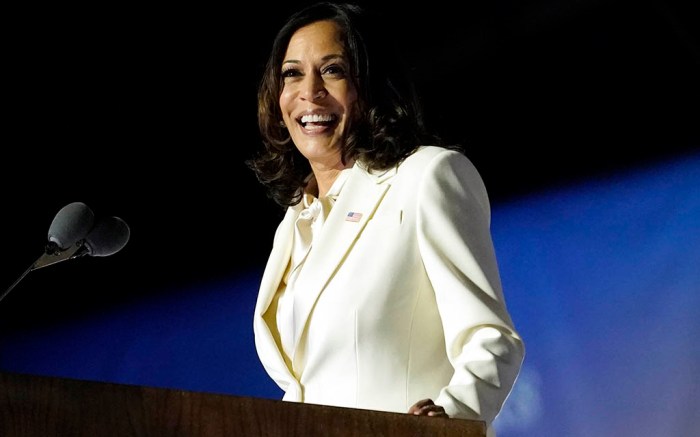 On the day that Kamala Harris became the first woman and first woman of color elected as vice president, she delivered a powerful victory speech that perfectly encapsulated this game-changing moment in American history.

Walking out to Mary J. Blige’s “Work That,” Harris wore a Carolina Herrera suit, in suffragette white, to honor generations — from the women who led the suffrage movement a century ago to her late mother to the little girls across America who “see this as a country of possibilities.”

After saluting President-elect Joe Biden, in his hometown of Wilmington, Del., as a healer and uniter, Harris — who is Black and of South Asian descent — recognized him for paving the way for her incredible rise. “What a testament it is to Joe’s character that he had the audacity to break one of the most substantial barriers that exists in our country. While I may be the first woman in this office, I will not be the last,” Harris said proudly.

“I am thinking about the generations of women — Black women, Asian, White, Native American women — who throughout our nation’s history — have paved the way for this moment. Women who sacrificed so much, including the Black women who are often overlooked, but have proved they are the backbone of our democracy.”

Powerful women in politics have worn suffragette white for many important moments. Hillary Clinton accepted the 2016 Democratic Presidential nomination in a white suit, and the Women of Congress have also donned the symbolic color as a show of force during President Donald Trump’s State of the Union addresses.

Tonight, Harris, who wore nude heels and signature pearl earrings, also debuted a pussy-bow blouse. Perhaps it was a tribute to another female leader, the late Margaret Thatcher, who popularized the style in the 1980s as the UK’s first female prime minister. Or maybe it was a bit of a jab at the outgoing first family. (Melania Trump wore the style after her husband joked about sexual assault.)

But the most important takeaway of the night had nothing to do with fashion. Our groundbreaking VP-elect has now risen higher than any other woman in American leadership and changed the course of history. It’s a long overdue moment, one that we should all take pride in.