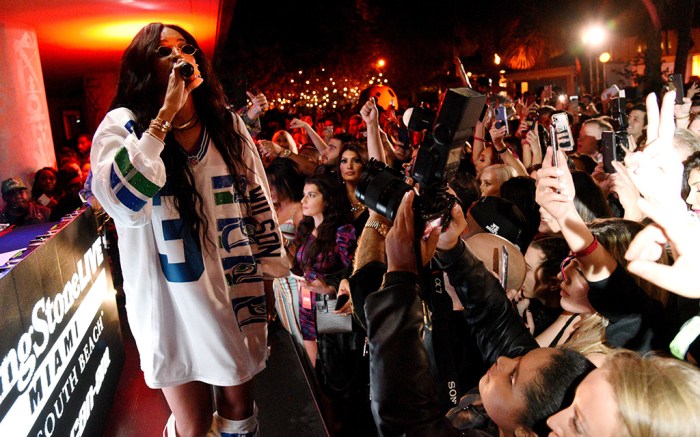 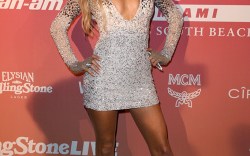 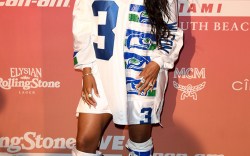 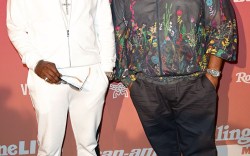 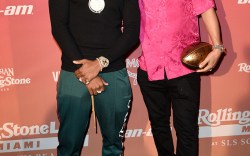 Miami was the place to be or be seen this weekend. The city is hosting Super Bowl LIV and celebrities came out in full force to celebrate. FN was there to capture it all.

While it was certainly an upbeat atmosphere, the death of Kobe Bryant and his daughter Gianna, who died in a tragic helicopter accident last month, weighed heavily on some of the biggest stars in sports and entertainment.

“Bless up Kobe Bryant. Bless up Gigi. Rest in peace,” DJ Khaled told FN on the red carpet at the Rolling Stone LIVE: Miami presented by Can-Am at the SLS South Beach event on Saturday night. “It’s Super Bowl weekend, we out here.”

Ciara, who is pregnant with her third child, also hit the stage to perform “1,2 Step,” “Goodies,” “Level Up,” “Lose Control” and more songs from her catalog. The singer dressed for the occasion wearing Nike Air Force 1 sneakers and husband Russell Wilson’s Seattle Seahawks jersey.

Inside SLS South Beach, other celebs, including Nene Leakes, Nick Lachey, Dr. Oz and Lil Jon mixed and mingled while sipping on Ciroc vodka and Rolling Stone’s exclusive beer made especially for the party with Elysian Brewing.

Paris Hilton in a glittery minidress and matching pumps also made an appearance as the celebrity DJ of the night — or we should say morning. She took the stage after 1 a.m.

Earlier in the day, Fanatics owner Michael Rubin also hosted his annual Super Bowl party at a tent on the beach at Loews Miami Beach Hotel, which included performances by Swizz Beatz, The Chainsmokers, Migos and Post Malone.

FN caught Post Malone, who was wearing a full suit and white slip-ons vans, as he entered the event and was being swarmed by fans. Yo Gotti made an impressive entrance, too, showing up with his entourage in two lime green Lamborghinis, which were branded with imagery from his new album.

Inside, Beatz addressed the crowd, telling fans to live life to the fullest because it’s not promised. Kevin Hart echoed that sentiment onstage, saying, “We’re celebrating life today. If you loved Kobe Bryant, then let’s put that positivity in the air.”

More that 1,500 Bryant jerseys were distributed to guests. No. 24 was seen on Jay Z, who made an appearance. He avoided the red carpet entirely and headed into the event. Dwyane Wade was also there, but skipped interviews and left shortly after walking the red carpet. Other guests included Robert Kraft, Meek Mill, G-Eazy, Mark Cuban, Aaron Judge, Jasmine Sanders and Robin Thicke.