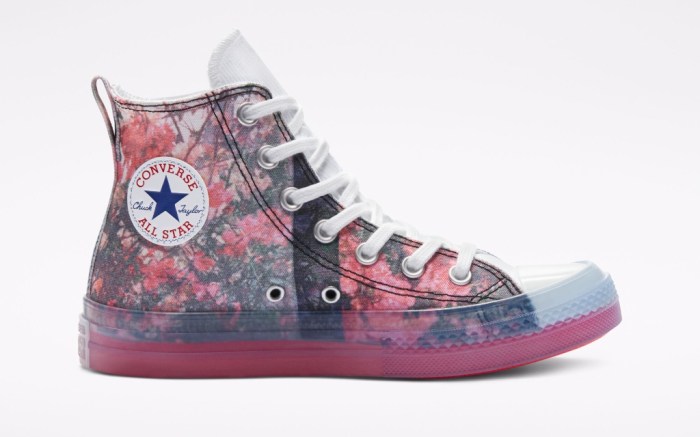 Photographer Shaniqwa Jarvis’ collaboration with Converse has been getting a lot of buzz as of late. And after launching on Converse.com today, the Converse x Shaniqwa Jarvis Chuck Taylor CX and coordinating hoodie have already sold out.

The unisex high-top shoe, which originally retailed for $100, features an original vibrant floral image inspired by a trip Jarvis took to Mexico. It’s printed in white, black and a “teaberry” color atop a stretchy canvas upper. Underfoot, the style includes CX foam midsoles and a new outsole designed for flexibility and durability.

If you’re eager to get your hands on a pair of the limited edition Chuck Taylors, you’re in luck. Although you’ll have to shell out a little more than the original retail price, you can still get a pair now on Farfetch.com for $150 and resale site StockX starting at $145.

Jarvis, known for her work capturing celebrities like Dev Hynes and Cardi B, became a photographer early in her childhood, inspired by her dad’s love of taking portraits. The Converse collaboration is a late-tribute to Jarvis’ father.

“My dad’s fashion style was extremely bold and in my mind as a little girl, it held some kind of power,” Jarvis said in a press release.

In the past, Converse has done many collaborations with big-names including “Stranger Things” actress Millie Bobby Brown and in July. They signed rising NBA star Shai Gilgeous-Alexander as an ambassador to the brand. They’ve also collaborated with other large companies such as the Los Angeles-based streetwear brand Rokit and Carhartt WIP.