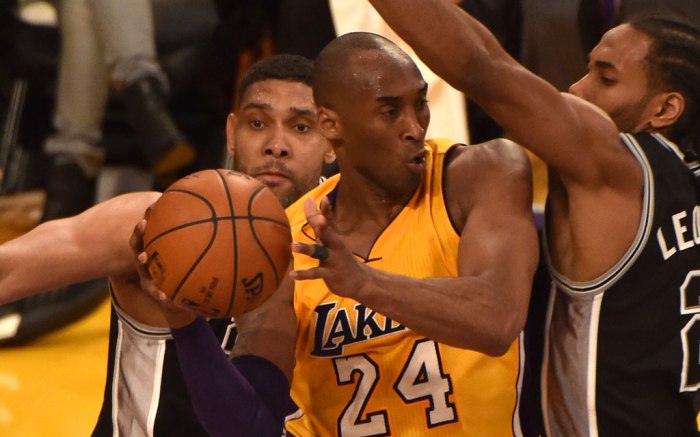 NBA fans are mourning the death of league icon Kobe Bryant, who died at 41 alongside daughter Gianna, 13, in a nine-fatality helicopter crash Sunday morning.

During his 20-year NBA career, Bryant cemented his status as an all-time great, with five league championships, two NBA Finals MVPs, a 2008 NBA MVP award and 18 All-Star games. Now, fans want the Los Angeles Laker to be permanently remembered in the form of a new NBA logo.

“With the untimely and unexpected passing of the great Kobe Bryant, please sign this petition in an attempt to immortalize him forever as the new NBA Logo,” reads a Change.org petition started by a user known as Nick M. As of 8:30 a.m. ET, the petition had around 179,000 likes out of 200,000 requested.

This should be the new NBA logo 🐐 pic.twitter.com/pL5jLgQ5Eo

“The NBA family is devastated by the tragic passing of Kobe Bryant and his daughter, Gianna,” the statement reads. “[Bryant] will be remembered most for inspiring people around the world to pick up a basketball and compete to the very best of their ability. He was generous with the wisdom he acquired and saw it as his mission to share it with future generations of players, taking special delight in passing down his love of the game to Gianna.”

” I loved Kobe — he was like a little brother to me. We used to talk often, and I will miss those conversations very much. He was a fierce competitor, one of the greats of the game and a creative force,” Jordan continued.

Fellow NBA alums Dwyane Wade, Scottie Pippen and Bill Russell were also among those to post touching tributes to Bryant, with Pippen writing: “I’m stunned. Words can’t even come close to describing it. Just an incredibly sad and tragic day.”

Current players around the NBA — including Austin Rivers of the Houston Rockets and Kyle Lowry of the Toronto Raptors — paid their respect to Bryant with handwritten messages on their shoes. Additionally, Dallas Mavericks owner Mark Cuban said Bryant’s number, 24, will be retired by his team.