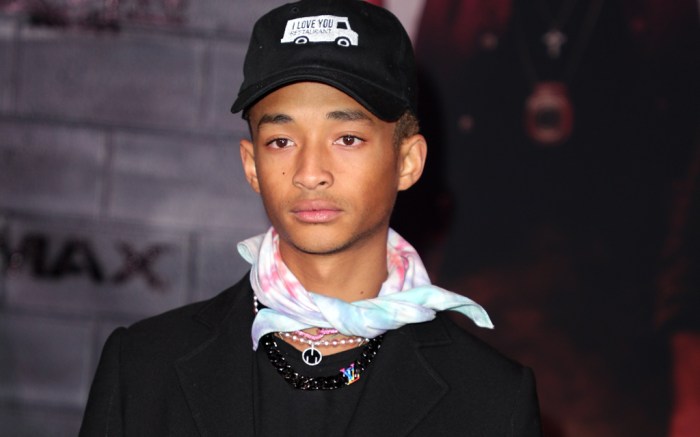 Nearly a year after linking up with New Balance, Jaden Smith is finally ready to debut his first signature sneaker with the brand.

Today, New Balance announced the release of the Vision Racer, a style named purportedly in honor of Smith’s tour. The vegan-friendly silhouette — Smith’s first collaborative release since joining the New Balance team — appears to borrow design elements from the ’90s and early aughts, with an oversize heel tab and a faux leather upper as well as an ultra-chunky midsole resembling a custom pair sported by Smith on the tour. The style comes in a bold color palette of baby blue with a hot pink “Vision” on the underfoot visible through a rubber outsole with translucent leaves. It is made of sustainably sourced and vegan materials, with recycled materials in the upper, lining and insole.

A new era is among us.

“Shared values of transforming the status quo; staying true to oneself; giving back to community; and, respecting heritage while co-authoring a distinct future, are the foundation of the relationship between New Balance and Jaden Smith,” said New Balance chief marketing officer and SVP of merchandising Chris Davis in a release.

The Vision Racer “Wavy Baby Blue” will launch globally on July 24 at Newbalance.com and in select retail locations with a $150 price tag.

Known for his colorful, androgynous style, Smith first joined forces with New Balance in June 2019. In the “Skate Kitchen” star’s role as a New Balance ambassador, his first duty was to promote a model of the 997, one the brand’s popular dad shoe silhouettes.

In addition to his work with New Balance, Smith has landed several other high-profile deals in the fashion and footwear space. The “Watch Me” performer appeared as part of the star-studded cast for Louis Vuitton’s pre-fall ’19 campaign. His eco-friendly company, Just (maker of Just Water) teamed up in September 2019 with Allbirds, the sustainably minded sneaker startup. Smith was also tapped by Levi’s to star in its latest ad campaign, appearing alongside longtime pal Hailey Baldwin. What’s more, the A-lister’s apparel company, MSFTSrep, partnered with Stance in August 2019, debuting its “Trippy Summer” collection at a pop-up shop in Los Angeles.