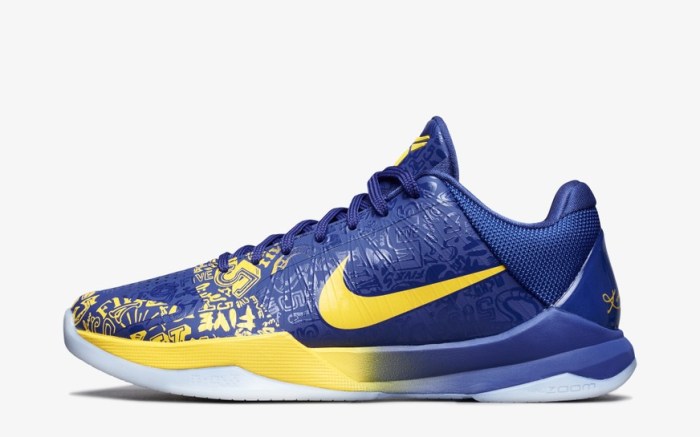 Nike’s classic Kobe 5 Protro “5 Rings” sneaker is back and is set to release on Sept. 30. The original “5 Rings” installment launched in 2010 after Kobe Bryant won his fifth and final championship victory for the Lakers.

The “5 Rings” sneaker features Lakers colors in a yellow and purple gradient colorway applied to the upper and midsoles. The shoe comes clad with a laser-etched collage of symbols designed to highlight the Mamba’s accomplishments. Kobe’s signature is drawn out on the heel scrawled in bold yellow cursive. The outsoles are color blocked in a milky-white finish.

This is just the latest in a string of public releases following Mamba Week in August. The Nike team has continued its run of Kobe 5 Protros with colorways for NBA players DeMar DeRozan and PJ Tucker. The Kobe 5 Protro PE “DeMar DeRozan” released Sept. 18 and featured Spurs’ team colors in a gray pattern of stripes and checkerboards.

PJ Tucker’s shoes, on the other hand, were just released today and featured zebra and hypnotic checker patterns throughout the upper coming in multiple colorways. The Nike Kobe 5 Protro PE for Tucker, which has already sold out, has been designed in several hues including oak particle gray, white, light cream, sail, university red, university blue, volt and voltage purple. The Houston Rockets player is a big fan of Bryant, crediting his influence on Tucker’s basketball career in a January interview with FN.

The Kobe 5 Protro “5 Rings” sneakers, which retail for $180, will hit the shelves at Nike and select retailers on Sept. 30.