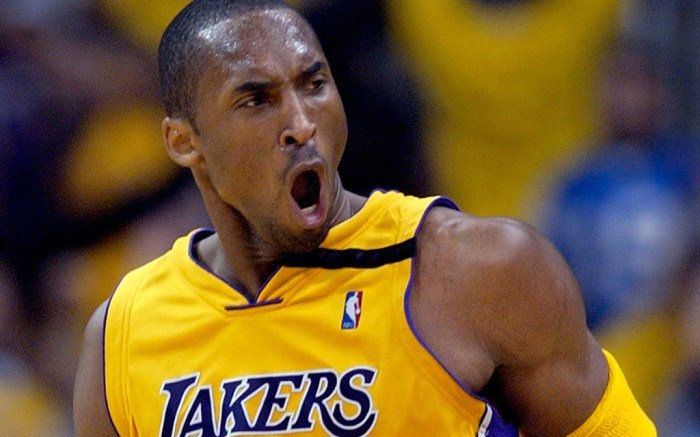 Several NFL players from both the San Francisco 49ers and Kansas City Chiefs are paying homage to Kobe Bryant with their cleats on the field at Super Bowl 54 in Miami tonight.

Chiefs star Demarcus Robinson wore one purple and one yellow cleat, representing the colors of the Los Angeles Lakers, the team Bryant played for throughout his 20-year career. The Nike shoes were printed with Bryant’s number 24 (he also wore number 8).

Also wearing Nike cleats was Dante Pettis of the 49ers. Pettis’ shoes had a snake-print upper, an ode to Bryant’s “Black Mamba” nickname, and came in Lakers colors. The cleats also featured an illustration of Bryant.

Meanwhile, 49ers receiver Emmanuel Sanders wore Adidas cleats in his team’s red and gold, but paid respect to Bryant with the message, “Rest in Peace.” The shoes also featured a number 24 at the collar.

Sanders posted an image of the shoes on Twitter alongside a Bryant quote: “I’ll do whatever it takes to win. Whether it’s sitting on the bench waiving a towel. Handing out cups of water to my teammates or hitting the game-winning shot.”

“I’ll do whatever it takes to win. Whether it’s sitting on the bench waiving a towel. Handing out cups of water to my teammates or hitting the game winning shot.” – 🖤 Mamba pic.twitter.com/p1BowN840D

Additionally, attendees at Hard Rock Stadium participated in a moment of silence for Bryant and the eight other people who were killed on Jan. 26. Bryant’s 13-year-old daughter, Gianna, was among the victims. Halftime show headliners Shakira and Jennifer Lopez have also planned a tribute to the NBA star.

Click through the gallery to see how NBA stars paid tribute to Bryant with their shoes.