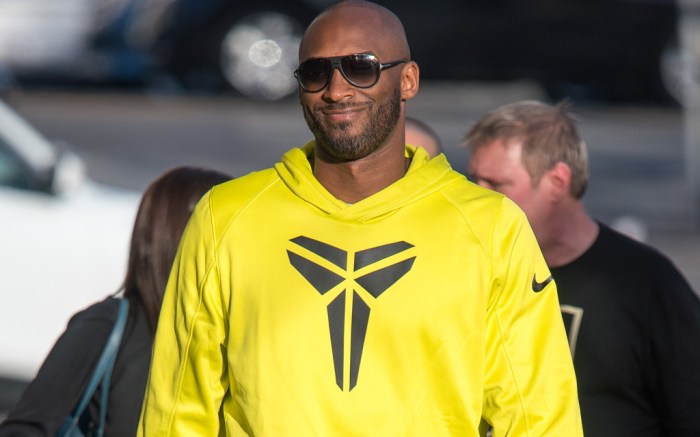 News of NBA icon Kobe Bryant’s untimely death today after a helicopter crash in Calabasas, Calif., has shaken the world of sports and sneakers, with his devoted fans sharing messages of what the baller meant to them.

His longtime sneaker endorser, Nike, issued the following statement: “Along with millions of athletes and fans throughout the world, we are devastated by today’s tragic news. We extend our deepest sympathies to those closest to Kobe, especially his family and friends. He was one of the greatest athletes of his generation and has had an immeasurable impact on the world of sport and the community of basketball. He was a beloved member of the Nike family. We will miss him greatly. Mamba forever.”

Michael Jordan said in a statement, “Words can’t describe the pain I’m feeling. I loved Kobe — he was like a little brother to me. We used to talk often and I will miss those conversations very much. He was a fierce competitor, one of the greats of the game and a creative force. Kobe was also an amazing dad who loved his family deeply — and took great pride for his daughter’s love of basketball.”

Several other influencers spoke with FN today, offering insight into what made Bryant a once-in-a-lifetime talent.

“I can’t stop crying. His work ethic was incredible,” renowned sneaker collector Mayor told FN. “This is one of his quotes that I hold dear to my heart: ‘Haters are a good problem to have. Nobody hates the good ones. They hate the great ones.’”

Famed sneaker YouTuber Foamer Simpson,  who is a well-known basketball fanatic, told FN that the NBA will never be the same after Bryant’s passing.

“I am completely devastated. It still doesn’t feel real. I grew up idolizing Kobe Bryant — we all did,” Simpson said. “He had such a profound affect on my life. The NBA hasn’t been the same since he left, and basketball will never be the same with him gone.”

Isack Fadlon, owner of L.A.-based sneaker boutique Sportie LA, said Bryant is not only a basketball and sneaker icon but an important part of Los Angeles’s history.

“As a family who grew up in Los Angeles, we are devastated by the news of Kobe Bryant’s passing. Kobe was deeply ingrained in the fabric of Los Angeles. His impact on our city started with basketball, but it transcended the sport,” Fadlon told FN. “His legendary persona was was felt everywhere; whether you were fanatical about basketball or rarely watched a game, the name Kobe meant something to you. It impacted you. You wanted the Kobe jersey. You needed a pair of Kobe kicks. While his genius on the court led the Lakers to five championships, he continued to be a champion to everyone off the court as well. He will be sorely missed, and we will all strive to honor his legacy in some way.”

Foot Locker president and CEO Dick Johnson, although devastated by the news, remembers his competitive drive with fondness.

“I am just absorbing the news as I have been out and about this afternoon. Like the rest of the sports world, I am shocked by the news of Kobe’s death. My heart goes out to Vanessa and his family at the loss of Kobe and his daughters,” Johnson told FN. “Kobe once said to his daughters, ‘It is not about the destination. It is about the journey,’ and what a journey Kobe had. His passion for the game, the energy he brought to the floor every night and his fierce competitive nature will be remembered always. Kobe was an athlete of the world and will be missed. This is a sad day for all of sports.”

Multihyphenate talent Tamara Dhia, an admitted Lakers fan, said she is choosing to remember the greatness Bryant exemplified on and off the court in his passing.

“There really are no words to truly capture the legacy of Kobe Bryant. He was so much more than an athlete. He was a husband, a father, a champion, a muse, a mentor, a teacher, an inspiration to millions around the world, whether or not they repped our beloved purple and gold,” Dhia said. “He was so willing to share his insight on a game that he loved so much. He taught us that greatness can be achieved by anyone, as long as you were willing to work hard for it. He showed us that excellence starts in the mind, but victory is won in the heart. He proved that you can still make history even in retirement. Los Angeles lost a staple, the world lost a hero. I hope kids continue to wear his jerseys, and lace up his sneakers and yell ‘Kobe’ every time they make a shot. He wasn’t just a star, he was a legend and legends never die. Mamba mentality forever.”

Aside from his legendary career, winning five NBA titles during his 20 seasons with the Lakers, the “Black Mamba” had a tremendous impact on the sneaker community.

When his time with Adidas was up, the baller would have the most historic sneaker free agency period in pro sports history, hitting the court in the best models from top brands in the sport (including the Reebok Question and multiple Air Jordans).

Bryant would join Nike in 2003, first playing in the brand’s Air Zoom Huarache 2K4 style. His first signature shoe with the Swoosh, the Zoom Kobe 1, made its on-court debut in 2005.

After his retirement in 2016, Nike continued to deliver looks bearing his name that were — and still are — worn by today’s best ballers, including DeMar DeRozan and Giannis Antetokounmpo, until he received a signature sneaker of his own.

Bryant was drafted No. 13 overall in the 1996 NBA Draft by the Charlotte Hornets and was traded to the Lakers. During his 20-year career, the baller earned two NBA Finals MVP awards and was the league MVP in 2008.

Bryant died in a Calabasas, Calif., helicopter crash this morning along with five other passengers, as first reported by TMZ Sports and confirmed by the L.A. County Sheriffs department. He was 41 years old.