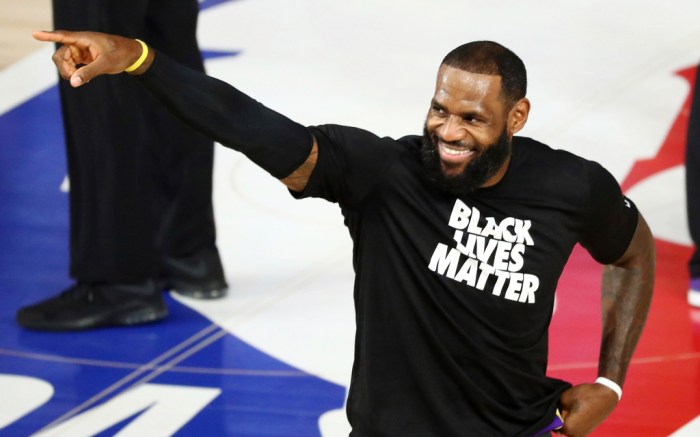 At President Donald Trump’s final campaign rally before election day, an unexpected name was thrown into the mix of conversation: LeBron James.

The US commander in chief mentioned the Los Angeles Lakers star during his event in Avoca, Penn., on Monday night in a discussion that also threw out commentary on the likes of Lady Gaga, Beyoncé, Jay-Z and Jon Bon Jovi.

“How about basketball?” Trump threw out before going into a discussion around NBA television ratings. “How about LeBron? I felt badly for LeBron, I felt very badly. Down 71% and that’s with the championship. I didn’t watch one shot. I get bored. Back, forth, back, forth. You know why? When they don’t respect our country, when they don’t respect our flag, nobody wants to watch, nobody.”

“The NFL is way down, you gotta stand for our flag,” added the president about the NFL television ratings. “You gotta really be great to our flag and to our anthem and if you don’t do that, we’re not watching.”

The commentary leaded to chants of “LeBron James sucks” rippling throughout the crowd as the president exclaimed: “What a crowd!”

Following the rally, James opted to not respond specifically to the events and instead took to Instagram to show his continued support for the Biden ticket. The athlete shared an image of former Vice President Joe Biden and U.S. Senator Kamala Harris with the caption: “One more day. Please !! We need EVERYTHING to change and it all starts tomorrow. #BidenHarris #MoreThanaVote.”

One more day. Please 🗳!! We need EVERYTHING to change and it all starts tomorrow. #BidenHarris #MoreThanaVote

Just a few days ago as well, the Nike athlete appeared in new videos for the Swoosh brand as the two sports powerhouses encouraged fans to get out and vote this year.

“It’s about all of us looking in the mirror and saying what can we do better to help change?” said James in the video shared to Instagram on Oct. 29.

@kingjames has been the people’s champ ever since he stole the spotlight as a teen. But he’s also a champion of the people, using his platform to ensure all the voices in his community are heard and counted. 👑 ⠀ “It’s about all of us looking in the mirror and saying what can we do better to help change?“ LeBron knows that change doesn’t happen overnight, so his fight for representation goes way beyond the November US election. He’s got big plans, but if anyone can pull them off, it’s King James.  ⠀ Visit the link in our bio for information on voting 🗳️

James has continued to be an advocate for equal rights across all boards and industries throughout his time in the spotlight and fighting injustice, in particular, has always been imperative for the Lakers star. In August, the All-Star athlete wore a spin-off design from Donald Trump’s “Make America Great Again” campaign hats that read “Make America Arrest the Cops Who Killed Breonna Taylor.”

James also worked with the initiative with More Than a Vote as well this election season. More Than a Vote is a collective of athletes working to end voter suppression in a collaborative effort with the NAACP Legal Defense Fund.