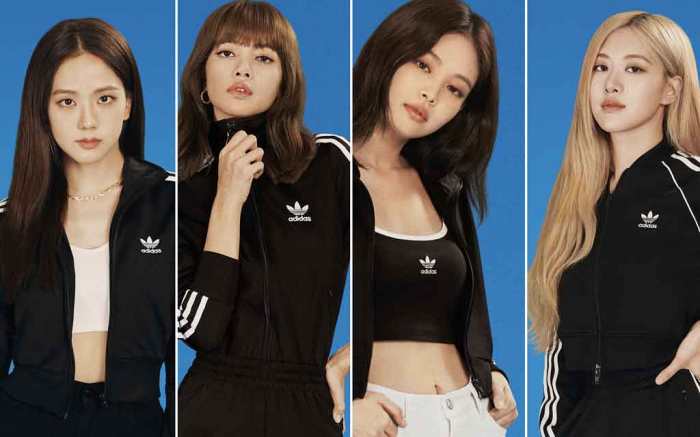 There are few groups in the world with as much clout as Blackpink. The quartet has transcended K-pop fandom to become global superstars, so their latest role is a fitting one.

Lisa, Rosé, Jennie and Jisoo have been tapped to star in Adidas Originals’ new “Change Is a Team Sport” campaign, for which the brand has “[brought] together game changers from across the worlds of music, fashion, sport and art,” according to a release. The campaign celebrates the iconic Adidas Superstar sneaker, which turns 50 this year.

The girl group appears in black-and-white tracksuits in the new images. Lisa and Jennie are clad in the Superstar sneakers, while Rosé and Jisoo are pictured in close-up shots.

Other tastemakers appearing in the campaign include “Grown-ish” star Yara Shahidi, famed gamer Ninja and singer-producer Pharrell Williams, to name a few. The photo series is accompanied by a film, directed by actor-director and Adidas collaborator Jonah Hill; it follows skater Jenn Soto as she zips through a facility filled with members of Adidas’ star-studded cast.

“There’s no knowledge without the older generation who did it first. And there’s no change or progression without the new generation. So if those two generations come together, I feel like that creates the atomic charge for great art and great creativity,” Hill said of his vision for the film in a statement.

Click through the gallery to see Blackpink’s most fashionable looks over the years.

Blackpink’s Lisa Has Supercool Style — Right Down to Her Shoes

Mickey Mouse Is Getting His Own Adidas Ultra Boost Sneaker

Blackpink’s Greatest Fashion Moments, From the Red Carpet to the Stage