‘We Did It for Kobe’: How Australian Open Players Are Honoring the NBA Legend 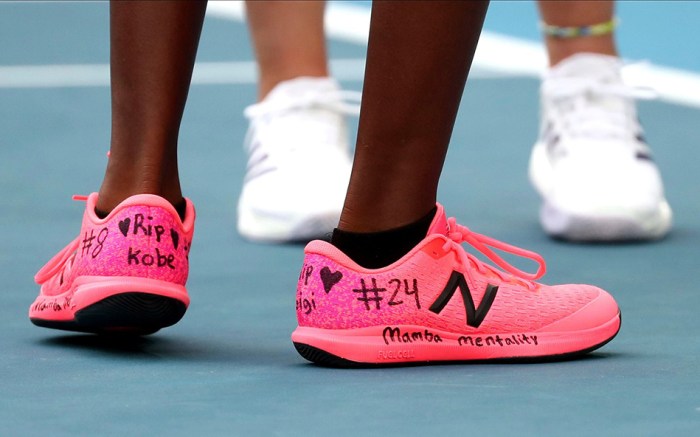 The impact of Kobe Bryant’s death Sunday morning weighed on athletes beyond basketball.

As tennis stars played at the Australian Open matches today in Melbourne, they had the Los Angeles Laker on their minds.

“We did it for Kobe today,” McNally told reporters at the end of the match. Gauff added: “We both looked up to him. Even speaking about it right now is a bit emotional. We had to do something for him and I know he’s looking down on us right now.”

The pair wore tributes to Bryant on their sneakers. Gauff’s pink New Balance kicks had the words “Mamba Mentality” written across the midsole, with the number 24, on the upper as well as the words “RIP Kobe.” McNally wrote “Kobe” and his numbers, 8 and 24, on her white Adidas kicks.

Meanwhile, Nick Kyrgios arrived on the court for his fourth round duel with Rafael Nadal wearing a No. 8 Bryant jersey. The Australian was himself considered a basketball prospect before choosing tennis. Kyrgios was later defeated, and Nadal advanced to the next round of play.

Following the match, Nadal paid tribute to Bryant with his words, encouraging fans to cheer for the star athlete.

“I wake up this morning with this terrible news and, yeah, [it’s] super sad,” Nadal said in an on-court interview after the match. “He had been one of the greatest sportsmen in history. So he deserves a round of big applause.”

Bryant died in a helicopter crash on Sunday morning in Calabasas, Calif., at age 41. His 13-year-old daughter, Gianna, was also on board. The crash resulted in nine fatalities, the Associated Press reported.

Outside the Staples Center in L.A., where Bryant held court for years, fans made a makeshift memorial for the star. Inside, at the Grammy Awards, several stars dedicated performances to Bryant, with Alicia Keys and Boys II Men joining together for an acoustic rendition of “It’s So Hard to Say Goodbye to Yesterday.”

Click through the gallery to see all the NBA on-court sneaker tributes to Kobe Bryant.

Before Nike, Kobe Bryant Had Some of Adidas’ Most Memorable Signature Sneakers